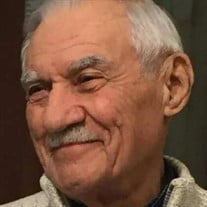 William “Bill” Louis Richmond, 92, of Aurora, IL passed peacefully in his home surrounded by his family on March 23, 2022. Bill was born February 13, 1930 to Max Richmond and Dora Mae (Bartley) Stover. On April 3, 1955 Bill married the love of his life Beverly Ann. Bill served honorably in the United States Army Air Corps and the United States Air Force. Over his lifespan he had numerous jobs, including working in the Quality Control department at American Can Company. He also worked for Illinois Tool Works (ITW). He was owner of Richmond Realty World and co-owned The Bilmar Group Inc with his son Mark Richmond; both of Aurora, IL. Bill served many years on the fundraising campaign of the United Way. He was also involved with the Wayside Cross Ministries. He served in the Lions Club and was a member of the Moose. Bill was also a boxer and a golden gloves runner-up in his youth and continued to enjoy watching boxing for many years following his career. Bill always lived life to the fullest. When it came to his family Bill was always “all in”, there were no limits, no rocks unturned, no task too big. Bill enjoyed the big and little things life had to offer. He loved to dance with his bride of 55 years, especially the jitter-bug. Bill and his wife loved to travel to see family, especially his sons, daughter, and grandchildren. He enjoyed many years working side by side with his sons, daughters-in-law and eventually grandchildren in the family business. Bill was a hard working man and intelligent business owner. He held a grand knowledge of many things and in the business world he never took no for an answer. He was a force of nature and passed this trait along to his children and grandchildren. He was a food connoisseur, always seizing an opportunity to eat out which he enjoyed almost as much as his wife’s cooking. He was a directions master and was the first person his grandchildren would call when they were lost. Bill could often be heard whistling a tune or singing along to a favorite song. He loved to read the newspaper and his bible, he was enthralled by technology, he enjoyed driving and giving compliments and gifts. He found happiness sitting outside watching the birds in his bird feeders and bird bath. Bill was a storyteller, an advice giver and a practical joker. He kept his family and friends laughing through gentle teasing, outlandish tales and shocking one liners. He always had an ornery grin, a twinkle in his eye and a laugh in his voice. Bill was a lifelong learner, a sensitive soul and a true American patriot. He was a lover of people and fully embodied what love means through his passion, selflessness, generosity, kindness, laughter, hugs, and loyalty. His greatest joy and source of pride came from his wife, his children, their spouses his grandchildren, and great grandchildren. He was often heard bragging about each of them everywhere he went. He rarely missed their events and was always ready to celebrate their milestones. His favorite day of the year was grandparents day; a day spent spoiling his grandchildren and always ended at a favorite restaurant. In his later years as his memory faded happiness could be found on his face and in his eyes as he watched his great-grandchildren play; they brought him peace. Bill believed in Christ, Sunday church service, and family dinners. Bill loved to say the prayer before a meal and his family would look forward to those moments. Bill’s prayers would exhibit his purest form, with his overpowering love of God, country, family, food, hard work, and laughter. Bill is survived by his sons Mark (Sarah) Hanson, Mark (Joy) Richmond, Scott (Jeff) Richmond, and daughter Dawn (Richard) Clark. He is survived by daughters-in-law Kristine Richmond and Yvette McMyne; his sister Betty Crunk and brother Herb Stover. He is also survived by his grandchildren: Dawn (Keith) Brockman, Robby (Kim) McMyne, Donnie (Shelly) McMyne, Danny (Nicole) McMyne, Melanie Leonard, Michael (Brittany) McMyne, Shay Hanson, Brady Hanson, Nikolas Garcia, Taylor (Neil) Rohrer, Jason (Kalyn) Richmond, Lane (Tony) Callahan, Madison Richmond, Jared Stone, Denver Clark, Brittany (Nick) Lopez, Blythe (Kent) Sorenson, and Bianca Richmond. He is survived by 26 great grandchildren as well as many nieces, nephews. Throughout his life he formed many special relationships with people including; Jim Nilon, Bob Gustafson, Manuel Lundqviest, Susan Royse and family, L. Earl Youtzy, Katharina and Josef Haselmajer, Edward and Jane Johnson, Dawn Bennett, The Baczek Family, Mike and Ovi Rosa and the extended Rosa Family, The Smoczynski Family, and Theodore “Teddy” Lopez. Bill was preceded in death by his wife Beverly, sons Craig Richmond, William McMyne and Robert McMyne; his parents, stepfather Herman Stover and his sisters Ruth Stover, Shirley Medley, Gladys Edmunds, Kate Belew, Carolyn Edmunds, and Dora Kyle. As well as several nieces and nephews. Bill was loved tremendously, will be greatly missed and fondly remembered by all who knew him. Funeral services will be held Tuesday, March 29, 2022 at 12:00 PM at THE DALEIDEN MORTUARY, Pastor Roy Frye will officiate with interment at Riverside Cemetery. Visitation will be held Tuesday, March 29, 2022 from 10:00 AM until the 12:00 PM at THE DALEIDEN MORTUARY, 220 North Lake Street, Aurora, Illinois 630-631-5500. In lieu of flowers memorial contributions in Bill’s name may be made to the Alzheimer’s Association or the United Way. Please visit our website at www.daleidenmortuary.com where you may leave condolences for Bill’s family.

The family of William L. Richmond created this Life Tributes page to make it easy to share your memories.

Send flowers to the Richmond family.