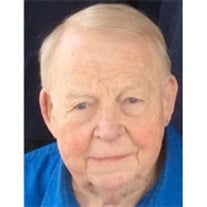 Wayne A. Kaufman, "Red the Barber," 87, of Yorkville, Il. (formally Aurora) passed away Saturday, December 26, 2020 at Rush Copley Hospital with COVID-19. He was born on March 18, 1933. He grew up in Somonauk, Il and graduated from Somonauk High School in 1951. He worked as a carpenter until drafted in the Army proudly serving during the Korean War from 1953 to 1955. He attended Weeden's Barber College in Chicago. After graduation, he barbered in Aurora for 63 years. In 1960, he opened and operated with partners in the West Plaza Barber Shop at the new West Aurora Shopping Plaza. He worked there for 60 years until COVID-19 forced a lockdown in March. He then decided to retire. He always enjoyed all his customers and greeted them by name and continuing the conversation from their last haircut. Always with conversations that included hunting, fishing, and he loved discussing Army days with veterans. Wayne was cutting hair of a third generation of customers. He was very proud of his family. He enjoyed the many years of family fishing trips in Wisconsin and memorable family vacations to Disney and to celebrate his 50th wedding anniversary at Seattle Space Needle and an Alaskan Cruise. On November 9, 1957, he married Irene Barr at St. John's Catholic Church in Somonauk. A marriage of 63 years and they had four sons; Daniel (Laura) of Dublin, Ohio, David (Lynne) of Scottsdale, Arizona, Robert of Ann Arbor, Michigan, and Michael (Kathy) of Ocala, Florida; grandchildren, Justin, Trevor, Daniella (Zachary) Schloss, Derek, Giovanna, Jordan, Elijah, and Jonah; great grandsons, Cameron and James Schloss; brother, Allen of Somonauk; sister, Beverly Bowen of Sheridan; and favorite uncle to many nieces and nephews. He is preceded in death by his parents, Raymond and Helen Kaufman; brother, Gerald; sisters, Anita Herzog and Barbara Sherman; and this past September, his daughter-n-law, Lisa Kaufman. Wayne was a member of Holy Angels Church, past member of Lucky Fifty Club, American Legion and Moose Club. Due to COVID-19 restrictions, a celebration of his life will be held at a later time when family and friends can gather. In lieu of flowers, you may contribute to Marie Wilkinson's Food Pantry, Holy Angels Church, or a charity of your choice in Wayne's name. Funeral Mass will be Thursday, December 31, 2020 at 10:30AM at Holy Angels Church.

Wayne A. Kaufman, "Red the Barber," 87, of Yorkville, Il. (formally Aurora) passed away Saturday, December 26, 2020 at Rush Copley Hospital with COVID-19. He was born on March 18, 1933. He grew up in Somonauk, Il and graduated from Somonauk... View Obituary & Service Information

The family of Wayne A. Kaufman created this Life Tributes page to make it easy to share your memories.

Send flowers to the Kaufman family.