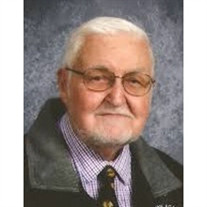 Walter J. 'Wally' Schroeder, Jr., 90, of North Aurora passed away peacefully on March 21, 2021 at Symphony of Orchard Valley. Wally was born on July 20, 1930 in Jackson, Missouri, the son of Walter and Alma Schroeder. In 1948, at 18 years old he enlisted in the US Army. He was originally assigned to the Infantry and stationed in Japan for occupation duty. On June 25, 1950 everything in Wally's life changed as the North Korean Communist forces attacked South Korea. On July 10, PFC Schroeder and his comrades landed in Korea, the second unit of American forces to arrive. He remained in Korea until 1951 and was awarded the Combat Infantry Badge, the Silver Star Medal, and the Bronze Star for Valor as a distinguished combat soldier during that conflict. He also received the National Defense Service Medal as well as being a five-time Good Conduct Medal award winner during his Army career. In 1959, he was assigned to Marmion Military Academy as a Junior ROTC instructor. In 1964, he was promoted to SGM and continued with Marmion where he retired from his active-duty Army career after the 1994-95 school year. Altogether, Wally served the Marmion community and its students for 53 years. The Marmion Alumni Association honored him as an "Honorary Alumnus". The Marmion Academy air rifle range as well as the "Schroeder Snipers" Rifle Team were named in his honor. Wally was dedicated to his family, to God, to his country and to Marmion. He was universally loved and respected by all who knew him. Wally is survived by his daughter, Linda L. Miller; son, Walter E. 'Ed' Schroeder; grandchildren, Carrie Neuman, Larry Miller, and James Miller; four great-grandchildren; sister-in-law, Shirley Bisher. He was preceded in death by his wife of 67 years, Louise, in July 2020. Memorials in SGM Walter Schroeder, Jr.'s name may be directed to the Marmion Alumni Association or Marmion Abbey, 1000 Butterfield Road, Aurora, IL, 60502. Visitation will be Friday, March 26, 2021 from 4:00pm to 7:00pm at THE DALEIDEN MORTUARY, 220 N. Lake St., Aurora, 630-631-5500 with a Funeral Service to follow with Marmion's Fr. Paul Weberg, OSB officiating. Due to Covid-19 pandemic protocols, non-family visitors are asked to pay their respects to the family for only a few minutes and exit the funeral home in a timely fashion. Social distancing and face masks are required for those in attendance. There is a limit of 50 people who can attend the service.

The family of Walter "Wally" Schroeder, Jr. created this Life Tributes page to make it easy to share your memories.