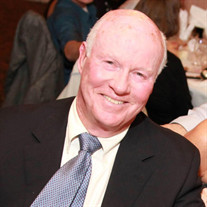 Timothy Robert Brennan died March 26, 2022, in Aurora, Illinois, surrounded by his family. He was born July 3, 1941 in Mankato, Minnesota, the son of Robert K. and Theresa A. Brennan (nee Nooney). While his father served in the United States Navy during World War II, Tim lived with his maternal grandparents, his mother and brother in Yankton, South Dakota. After the war, Robert moved his family to Sioux City, Iowa where he worked in the stockyards and, with his three brothers, founded Brennan Cattle Company. While Tim was in grade school, the family moved to Freeport, Illinois to own and operate a company feedlot in Lanark, Illinois. Tim and his brother, Jim, often worked at the feedlot as teens. Tim graduated from Freeport’s Aquin Catholic High School in 1959 and Notre Dame University in 1963. He was a student manager and competitive boxer with the university’s Bengal Bouts. And his passion for Notre Dame sports extended throughout his entire life as a “Fighting Irish” fanatic! Upon graduation, he worked briefly for Trans World Airlines and then joined Brennan Cattle Company, selling feeder cattle throughout Northern Illinois and Wisconsin, working out of another Brennan Cattle feedlot in Kirkland, Illinois. Tim married his wife, Hilary (nee Adams) on March 26, 1966 and the couple lived in Dekalb and Sycamore, Illinois while Tim continued working in the cattle business. In 1972, Tim left the family business and moved to Aurora, Illinois to work as a commodity broker with Merrill Lynch, Lincoln Commodities and later at RBH, Inc. as a partner and commodity trader at the Chicago Mercantile Exchange. Over the course of his career, Tim introduced many young, aspiring traders to the futures industry. He was elected to the Board of Directors of the CME and served with distinction as Chair of the Business Conduct Committee. Tim retired in 2003, but continued to e-trade commodities with his son, Rob, into his late 70’s. Tim was an avid golfer and long-time member of Aurora Country Club, serving as board chairman from 1999 to 2000. He wrote many letters of support for club caddies who successfully applied for Evans Scholars Foundation college scholarships. He was a devoted Catholic and active in the Aurora community, serving on the capital campaign committee for Aurora Central Catholic High School and on the Compassion Foundation Board of Directors for the Missionaries of the Sacred Heart. He was also a generous donor to the Diocese of Rockford, Mercy Center for Health Care Services, Aurora University and CME charities. In addition to his parents, Tim was preceded in death by his only sibling, James Edward Brennan (1943-2021). Surviving in addition to his wife of 56 years, Hilary, are his daughters, Jessica Ann Garrity of North Aurora, Illinois, and Laura Lee Poto (David) of Downers Grove, Illinois, and his son Robert James Brennan of Chicago, Illinois; his four grandchildren, Fiona and John “Jack” Garrity, Connor and Max Troha; and many Brennan family cousins, nieces and nephews. Tim considered his children and grandchildren to be his most valued gifts and sources of pride. Funeral services will begin Saturday, April 9, 2022 at 12:30 PM from THE DALEIDEN MORTUARY to Holy Angels Church in Aurora for Memorial Mass at 1:00 PM with Rev. Dean Smith, officiating. Entombment of cremains will follow at Mt. Olivet Cemetery in Aurora. Memorial visitation will be on Friday, April 8, from 3:00 until 7:00 PM at THE DALEIDEN MORTUARY, 220 N. Lake St Aurora IL 60506. 630-631-5500. In lieu of flowers, contributions may be made in Tim’s memory to The Compassion Foundation, Aurora Central Catholic High School, Aurora University and Aurora Area Interfaith Food Pantry.

Timothy Robert Brennan died March 26, 2022, in Aurora, Illinois, surrounded by his family. He was born July 3, 1941 in Mankato, Minnesota, the son of Robert K. and Theresa A. Brennan (nee Nooney). While his father served in the United States... View Obituary & Service Information

The family of Timothy Robert Brennan created this Life Tributes page to make it easy to share your memories.

Send flowers to the Brennan family.