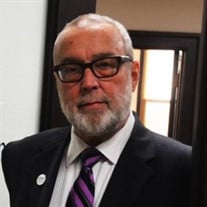 Thomas J. Weisner, Mayor, Community Advocate, Peace Corps Volunteer, Devoted Husband and Father, Dies at 69. Thomas J. Weisner, the visionary former Mayor of Aurora, IL, passed away peacefully following complications from cancer at age 69. Weisner stepped down as Mayor in 2016 to focus on his health after battling cancer for more than decade. He is credited with transforming the city of Aurora from an old industrial town in decline to one of the “Best Places in the United States to Realize the American Dream,” according to SmartAssett. Born in Batavia to Kathleen S. and John T. Weisner, Tom attended Marmion Military Academy, Marquette University and Aurora University, receiving a Bachelor’s degree in Organizational Development. He moved to Aurora in 1973 after marrying his lifelong love, Marilyn Hogan. Fully embracing the notion that he could make the world a better place, he joined the Peace Corps in 1981 with Marilyn, serving the native population for five years by assisting with health and nutrition improvement projects. Returning home to Aurora, Tom began a long career with the City of Aurora, culminating in his election as its 57th Mayor in 2005, serving for three terms. With his beloved family at the forefront, Tom’s resolve to make his world, the community of Aurora, a better place became a deeply personal mission. Guiding the city through the most devastating national recession since the great depression, he remained committed to his vision of a safe, vibrant, modern Aurora. He was a persistent and determined leader with a commitment to consensus building, positively changing the landscape of Aurora forever. Tom was a friend and fierce advocate for disadvantaged people and persons with disabilities, both as a leader and a servant, serving on the Boards of numerous organizations, including East Aurora Educational Foundation, United Way, Quad County Urban League, and Communities In Schools, and championing the causes of the disability community. He also rang bells for the Salvation Army, supported struggling immigrant families and mentored students. Mayor Weisner was a driving force behind countless initiatives that serve residents, businesses and visitors of Aurora each day, including: completion of the Eola Road Interchange, expansion of Chicago Premium Outlets, construction of Aurora’s Police Campus, building of the Santori Public Library, opening of River Edge Park, launch of Paramount’s Broadway Series, expansion of Waubonsee Community College’s Aurora Campus, expansion of early childhood education opportunities through SPARK, development of the Station Boulevard neighborhood, enhancement of the Route 59 transit center, reconstruction of 12 bridges, construction of the Ogden Ave. overpass, reconfiguration of Aurora’s one-way streets, revitalization of the St. Charles Senior Living Center, renovation of Leland Tower, Restaurant Row, the Mayan renovation, redevelopment of the old public library, development of River Street condos, redevelopment of the Fred Rodgers Magnet Academy, and implementation of Aurora’s fiber optic network. Prior to leaving office, Weisner laid the groundwork for several influential projects that continue to move forward today, such as opening of the Paramount Center for the Performing Arts, development of the Weisner Family Career Development Center, and construction of a pedestrian bridge connecting the East and West sides of the community near River Edge Park. Mayor Weisner’s success in Aurora gave him a platform to tackle other regional, state and national policies. He became an outspoken supporter of railroad safety, leader on regional water sustainability and advocate for pension reform. Despite all his success and persistent calls to consider higher office, Tom never wavered from his commitment to Aurora. Tom believed that Aurora’s success has never been dependent on any one person, but on the promise that “each of us has the power to shape Aurora’s future,” and hoped to inspire a new generation of leaders to act on the belief that they too can change their community – their world – through service. Tom Weisner is survived by his wife Marilyn Hogan Weisner, son Anthony (Allison) Scotti, granddaughters Olivia and Zoe, sisters Judie (Rick) Clark, Wendolyn (Gerald) Smith, Wayne (Candy) Weisner, and numerous beloved nieces, nephews, and cousins. He was preceded in death by his son Thaddeus in 2006, and his parents Kathleen (Schramer) and John T. Weisner. He will lie in state at New England Congregational Church, 406 W. Galena Blvd, Aurora, IL 60506 on Thursday, January 10, 2019 and Friday, January 11, 2019 from 2:00pm until 7:00pm both days. A private burial will take place at Marywood Cemetery with Rev. Bernard Schaefer, OSB, officiating. A memorial service will be held on Monday, January 14, 2019 at the Paramount Theatre, 23 E. Galena Blvd, Aurora, IL 60506 at 11:00am with Rev. Gary McCann officiating. Arrangements are being handled by THE DALEIDEN MORTUARY, 220 N. Lake St., Aurora, 630-631-5500. Please visit our website at www.daleidenmortuary.com where you may leave condolences for Tom’s family. In lieu of flowers, memorial contributions may be made in Tom’s memory to the Weisner Family Foundation, #164, 2112 W. Galena Blvd. Ste. 8, Aurora, IL 60506 or the Aurora Area Interfaith Food Pantry, P.O. Box 2602, Aurora, IL 60507-2602

The family of Thomas J. Weisner created this Life Tributes page to make it easy to share your memories.

Send flowers to the Weisner family.