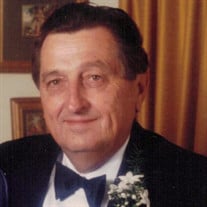 Tamás Sándor Javorik, 90, of Aurora, passed away on Tuesday, December 7, 2021. He was born September 14, 1931 in Szilsarkany, Hungary, the son of Sándor and Maria Palocsay. In 1956, he married Edith Schinkovits in Hungary. Tamás and Edith immigrated to the United States in 1957, after the failed Anti-Communist Revolution in Hungary. Thomas earned a Master’s Degree in Aero-Photogrammetry at the Technical University of Hungary and was employed for twenty-five years by the City of Aurora as a civil engineer and was commissioner of public works. He lovingly built two houses for his family in Aurora. He earned a private pilot’s license as a young man. He enjoyed boating and had a lust for life and was always ready for a party. He will also be remembered as an ardent bridge player and as a dedicated father and grandfather. He is survived by his daughter, Kathleen (Matthew) Rieser; grandchildren, Ariana, Tamás, and Andrea; nephew and godson, Alex Javorik. He was preceded in death by his beloved wife, Edith and parents. Funeral Mass will be Monday, December 13, 2021 at 9:30am from THE DALEIDEN MORTUARY to Holy Angels Church at 10:00am. Fr. Michael Lavan will officiate with interment at Mt. Olivet Cemetery. Visitation will be Sunday, December 12, 2021 from 4:00pm until 7:00pm at THE DALEIDEN MORTUARY, 220 N. Lake St., Aurora, 630-631-5500. Due to Covid-19 pandemic protocols, face masks are required at the funeral home and at church. In lieu of flowers, donations can be made to Holy Angels Catholic Church, 180 S Russell Ave, Aurora, IL 60506.

Tamás Sándor Javorik, 90, of Aurora, passed away on Tuesday, December 7, 2021. He was born September 14, 1931 in Szilsarkany, Hungary, the son of Sándor and Maria Palocsay. In 1956, he married Edith Schinkovits in Hungary. Tamás and Edith immigrated... View Obituary & Service Information

The family of Tamás Javorik created this Life Tributes page to make it easy to share your memories.

Send flowers to the Javorik family.