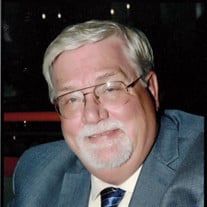 Steven D. Garrison, 70, of Oswego, passed away peacefully surrounded by family on Monday, October 25, 2021 at 12:25pm. He is survived by his immediate family; his loving wife, Carolyn and his beloved son, Dan as well as many brothers and sisters in law, nieces and nephews, cousins, and friends. Steve was born January 5, 1951 and raised by two loving parents, William R. and Bea E. Garrison of Aurora. Steve was a 1969 graduate of West Aurora High School and went on to serve in the 3rd Infantry Division in the United States Army in Würzburg, Germany. Steve married Carolyn in 1986 and soon afterward added Dan to the Garrison family in 1989. Afterwards, Steve had a dedicated career with the City of Aurora as well as DuPage and Kane Counties for many years. No matter the situation, Steve always seemed to have something funny to say. An avid golfer, hockey, and F1 & road racing enthusiast; he also coached several youth and high school hockey teams including the Cyclones and the Oswego High School Hockey Club. He also enjoyed watching University of Minnesota Golden Gopher hockey. Steve is preceded in death by his father, William, his mother, Bea, his father and mother in law, Albert and Rita Hames, brothers in-law Fred and Rick, his sister in-law Cherilyn, and nephew Michael. Funeral services will be held on Friday, October 29, 2021, at 10:00 AM at THE DALEIDEN MORTUARY. Visitation will be held on Thursday from 3:00 until 7:00 PM at THE DALEIDEN MORTUARY, 220 N. Lake St, Aurora, Illinois 60506. 630-631-5500. Due to Covid-19 pandemic protocols, social distancing and face masks are required for those in attendance. In lieu of flowers, we encourage you to make a donation to the charity of your choice in his name.

Steven D. Garrison, 70, of Oswego, passed away peacefully surrounded by family on Monday, October 25, 2021 at 12:25pm. He is survived by his immediate family; his loving wife, Carolyn and his beloved son, Dan as well as many brothers and sisters... View Obituary & Service Information

The family of Steven D. Garrison created this Life Tributes page to make it easy to share your memories.

Send flowers to the Garrison family.