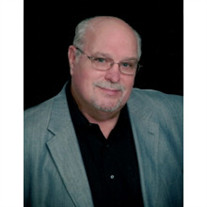 Stephen C. Ryburn, 73, of Aurora, IL. passed away Monday, September 28, 2020 at Delnor Hospital in Geneva, IL. He was born February 26, 1947 in Sandwich, IL. Stephen was a member of St. Anne Church in Oswego, Illinois and the Phoenix Club in Aurora. He was a 1965 graduate of Sandwich High School. On October 25, 1975 he was united in marriage to Joyce A. (Barbel). Stephen's mill working career spanned many years. He was employed by Supreme Millwork Company for thirty-two years from 1968 until 2000; Precision Woodworking from 2000 until 2005; from Parenti & Raffaelli from 2005 until 2010; Midwest Woodworking & Vennering Company from 2010 until 2011; Surface Solutions in 2011 and from 2011 until his retirement in 2014, he was employed by Wheaton Associates. He later worked for the Counter Top Factory from January of 2015 until 2017. Stephen is survived by his wife of 44 years, Joyce A. (Barbel) Ryburn of Aurora; three daughters Stacy S. Ashton; Shelley A. (Joel) Gauthier and Jennifer J. Kubek; six grandchildren Michael S. and Ocean Emma Ashton; Sydney and Samantha Gauthier and Dylan and Derek Kubek; two brothers James (the late, Bonnie) Ryburn and Kenneth (Nancy) Ryburn; numerous aunts, uncles, nieces, nephews and cousins and by his sister-in-law, Pat (the late, Martin) Rutsay and brother-in-law William (Ruthann) Barbel. He was preceded in death by his parents William E. and Marian E. Ryburn and by his mother-in-law and father-in-law Doris and Ralph Barbel. A funeral mass will be offered on Thursday, October 1, 2020 at 12:00 noon at St. Anne Church, 551 Boulder Hill Pass, Oswego, IL. 60543. by Fr. John Ouper will officiate. Inurnment will be private at a later date at Lincoln Memorial Park, Oswego, IL. Visitation will be Thursday morning, October 1, 2020 at THE DALEIDEN MORTUARY, 220 N. Lake St. Aurora, IL. from 9:00 am until the funeral hour at 11:15am with a brief prayer service and procession to St. Anne Church. Due to Covid-19 pandemic protocols, non-family visitors are asked to pay their respects to the family for only a few minutes and exit the funeral home in a timely fashion. Social distancing and face masks are required for those in attendance. In lieu of flowers, memorial contributions in Stephen's name may be made to either St. Anne Church; Rosary High School, 901 N Edgelawn Dr, Aurora, IL 60506 or to the American Cancer Society, PO Box 22478, Oklahoma City, OK 73123.

Stephen C. Ryburn, 73, of Aurora, IL. passed away Monday, September 28, 2020 at Delnor Hospital in Geneva, IL. He was born February 26, 1947 in Sandwich, IL. Stephen was a member of St. Anne Church in Oswego, Illinois and the Phoenix Club... View Obituary & Service Information

The family of Stephen C. Ryburn created this Life Tributes page to make it easy to share your memories.

Send flowers to the Ryburn family.