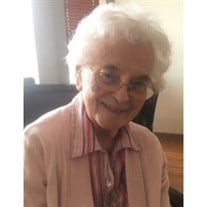 Shirley M. Wagner, age 94, passed away on Thursday, March 4, 2021, at Presence Fox Knoll in Aurora. Shirley is survived by her son Jim, her daughter Mary Kay (former Sr. Ann Mary), her grandchildren Tim (Dana) Wagner, Amy (Mark) Colwell, Michael Haddock and Beth (Steve) Messina. She also has several great grandchildren, Cal (Kellie) Wagner, Taylor, Rory and Jack Haddock, Reece and Sydney Wagner, Ava and Evan Messina. Shirley is preceded in death by her husband Ken (2002), her sister Betty Hauser, and her brother Walter Blank, as well as her parents Lucille and Walter Blank. Shirley was born in Aurora on May 8, 1926. She attended East Aurora High School. Shirley married her husband, Ken, after being introduced to him by a co-worker, Rose Wagner, who also happened to be Ken's aunt! They were married October 8, 1946, and enjoyed 55 years of marriage. After moving to the west side of Aurora, they became very active members of Holy Angels Parish. Shirley was active in the St Anne's Society, worked in the Religious Education Office, was a Eucharistic Minister, volunteered at Mercy Hospital, delivered Meals on Wheels with Ken, and brought the Eucharist and prayed the Rosary with residents at Countryside Nursing Home. When Ken retired they enjoyed a great deal of traveling and a few months as snow birds every year in Florida. Jim and Mary Kay are so grateful to the wonderful caretakers on the Memory Care floor at Fox Knoll and those of Rainbow Hospice, especially during this past year when we were unable to visit her because of the pandemic. They took care of Shirley like she was their own Mom and were wonderful about keeping us updated on how she was doing, including video calls. Private funeral services are being handled by THE DALEIDEN MORTUARY, 220 North Lake Street, Aurora, Illinois 60506. For further information please call 630-631-5500 or visit daleidenmortuary.com where you may leave condolences for Shirley's family.

The family of Shirley M. Wagner created this Life Tributes page to make it easy to share your memories.

Send flowers to the Wagner family.