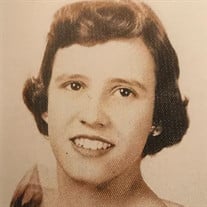 Shirley Faye Sweeney Konen, 81, of Aurora, Illinois, passed away Saturday, June 8, 2019 in Aurora. She was born July 16, 1937 in Princeton, Kentucky. Shirley grew up in Princeton with her siblings Ed, Saundra, Annie, Wayne and Donnie. Upon graduating from Caldwell County High School in 1954 at the age of 17, she left home to start her career as a stewardess for Eastern Airlines and American Airlines. In 1961, Shirley met Vincent Konen, who became her husband four short months later. While there were varying funny stories about their courtship depending upon who you asked, they fell in love and were married on July 29, 1961. Shirley’s love for travel kept her involved with the airline industry as a member of the Kiwi Club. She served as a board member of the Phoenix Chapter and enjoyed convention trips with her fellow Kiwis. Shirley was an energetic, outgoing, and fun-loving woman who believed that there were no strangers in life, just friends you haven’t met yet. This outlook on life served her well for 81 years. Shirley had a wonderful circle of friends with whom she enjoyed traveling to Florida to get away. She was involved with the St. Anne’s Society and Mercy Auxiliary Board for many years, serving as president for both. Shirley was also a professional volunteer and was a licensed agent at Konen Insurance Agency. She had long lasting friendships with many of the Dominican Sisters at Rosary and in Springfield, IL. Shirley and Vince’s bond with Marmion spanned well over 50 years. As a convert she cherished her Catholic faith. She enjoyed her travels to Europe and Guatemala with the Marmion monks and the Marmion alumni and their spouses. Shirley and Vince retired to Scottsdale, Arizona in the early 1990’s where she made many close friends while knitting many beautiful creations. Shirley was a devoted wife, mother, grandmother, and friend. She loved family travels and celebrating her birthday on the River Boat with Mr. Wehling. Shirley was very proud of her Kentucky roots and spent many fun times with family and friends in Princeton,Kentucky. Her children would often tease that she should have bought stock in McDonald’s as she loved her sausage biscuit with cheese and coke, no ice. Survivors include her five children, Zoe’ (Jerry) Knudtson, Kerrie (Mark) Pelenytschka, Brian (Ann) Konen, Jennifer (Todd) Weston, and Eric (Jen) Konen; her thirteen grandchildren: Tegan, Nicholas, Patrick and Emma Knudtson, Nathan, Charlie, and Regan Konen, Wyatt, Luke, and Maddie Weston, and Lilly, Sydney, and Henry Konen; her sisters Saundra and Annie and brothers Wayne and Donnie; and numerous nieces and nephews. She was preceded in death by her husband, Vince, her parents, and her brother Ed.The family would like to express special gratitude to the community of Marmion monks. Shirley was truly blessed to be a part of such a wonderful community of faith. Funeral Mass of Christian Burial will be held Thursday, June 13, 2019 at 9:30 am at Marmion Abbey Church, 850 Butterfield Road, Aurora. Interment will follow at Marmion Abbey Cemetery. Visitation will be held Wednesday, June 12, 2019 from 2:00 PM - 7:00 PM at The Daleiden Mortuary, 220 N. Lake Street, Aurora, IL 60506. (630) 631-5500. Please visit our website at www.daleidenmortuary.com where you may sign the guest book or leave condolences for Shirley’s family. In lieu of flowers, memorial contributions may be made to the Marmion Abbey and Academy, 1000 Butterfield Road, Aurora, IL 60502 or to Rosary High School, 901 N. Edgelawn Dr.,Aurora, IL 60506.

Shirley Faye Sweeney Konen, 81, of Aurora, Illinois, passed away Saturday, June 8, 2019 in Aurora. She was born July 16, 1937 in Princeton, Kentucky. Shirley grew up in Princeton with her siblings Ed, Saundra, Annie, Wayne and Donnie. Upon graduating... View Obituary & Service Information

The family of Shirley Faye (Sweeney) Konen created this Life Tributes page to make it easy to share your memories.

Send flowers to the Konen family.