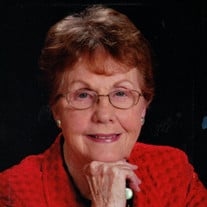 Rose Marie Wood, 87, of Aurora, Illinois, passed away at home on Tuesday April 19, 2022. She was born January 4, 1935, in Marseilles, Illinois, to Joseph Andrew Maier and Anna Rita (Dunn) Maier. After graduating valedictorian from Marquette High School (Ottawa) in 1952, she attended Marycrest College in Davenport, Iowa, for two years before transferring to the University of Illinois at Champaign-Urbana, where she earned her bachelor’s degree in music education, graduating Top Independent Woman Scholar in the university’s class of 1956. During the 1956-57 school year, she taught choral and general music at Herrick Junior High School in Downers Grove. She married George Joseph Wood on July 6, 1957, at St. Joseph Catholic Church in Marseilles and lived for two years in Watertown, New York, while George was stationed at Fort Drum. There she taught French and College Prep English at Watertown High School and gave birth to the first of their five sons. In 1959, the family moved to Aurora. She taught part-time at Madonna High School from 1966 to 1968 as Senior Piano Coach. While raising five boys and teaching piano at Aurora University since 1971, she entered graduate school at Northwestern University and in 1976 completed her master’s degree in Piano Performance under the tutelage of Pauline Lindsey (student of Artur Schnabel). In 1975 she was National Semifinalist in the Society of American Musicians Piano Competition. Over the following four decades, she was a frequent performer in recital and chamber music (Borealis Trio and Wood Family Chamber Players) throughout the region, and performed as concerto soloist with the Fox Valley Symphony in 1975, 1978, and 1982. In addition to working with Pauline Lindsey, she studied piano in masterclass with Menachem Pressler, John Browning, Byron Janis, Ruth Laredo, Dmitri Paperno, and Jonathan Shames. Known throughout the state and region as pianist and teacher, she served as an adjudicator for the Music Teachers National Association, Illinois State Music Teacher Association, and St. Paul Federal Piano Competitions. She was on the Board of Directors of the Fox Valley Symphony Orchestra, Illinois State Music Teachers Association, and Aurora Community Concert Series. She performed monthly with the Northwestern University Piano Repertoire Group since 1976 until a recent serious injury precluded her from doing so further. She accompanied a great many high school students at solo/ensemble festivals, served as harpsichordist for Aurora’s “Do-It-Yourself Messiah” from 1976 to 1992, taught piano at the Illinois Math and Science Academy from 1988 to 2019, and retired from Aurora University in 2019 after 48 years of teaching piano and music appreciation. Beloved by students and colleagues, the piano studio at Aurora University was named in her honor. As much as music, performing, teaching, and service were integral to her life, she had no higher priority than her faith, family, and friends. She delighted in the lives of her sons, grandchildren, and great-grandchildren, and gathered often with friends after Mass. She loved gardening, traveling, and cooking (especially desserts), and had a passion for making everyone else feel important. She is survived by sons Thomas (Mary) Wood of Wooster, Ohio, Brian (Mary) Wood of Cumming, Georgia, Michael (Susan) Wood of North Aurora, Illinois, David (Jami) of Rochester Hills, Michigan, and Peter (Jodi) of Mobile, Alabama; eighteen grandchildren (Anna, Austin, Brandon, Catherine, David, Erica, Johnathan, Kyle, Lauren, Logan, Mark, Matthew, Nicholas, Paul, Rachel, Samantha, Stephen, and Thomas); four great-grandchildren (Harrison, Henry, Isabelle, and Jane); sisters Loretta Parizek of Lisle and Mary Lou (Joseph) Schwarzbauer of Florissant, Missouri; brother Joseph T. Maier of Brookfield, Wisconsin; and George Wood. She was preceded in death by her parents and sister, JoAnn O’Neill. A Mass of Christian Burial will be celebrated at 9:30 a.m. from The Daleiden Mortuary, 220 N. Lake Street, Aurora Monday, April 25, continuing to Holy Angels Church in Aurora, Illinois for her funeral mass at 10:00 a.m., Rev. Michael Lavan will officiate. Her burial will be at Mount Calvary Cemetery in Seneca, Illinois. The visitation will take place on Sunday, April 24, from 3:00 to 7:00 p.m. at The Daleiden Mortuary, 220 North Lake Street, Aurora, (630) 631-5500.

The family of Rose Marie Wood created this Life Tributes page to make it easy to share your memories.

Rose Marie Wood, 87, of Aurora, Illinois, passed away at home...

Send flowers to the Wood family.