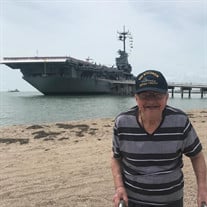 Ronald Harry DiGrazia, 84 passed peacefully September 2, 2021 at home in San Antonio, TX, surrounded by his family. He was born January 21, 1937, to the late Adeline Farley and Enrico DiGrazia in Chicago, where he spent most of his childhood. He was the caring husband of the late Betty (Kiesling) for 54 loving years (2017); father of Karen (Brian) Shustar of Aurora and Debra (George) Brooks of San Antonio; grandfather of Stephen, Anthony and Branden(Diana) Shustar, Jonathan Ascencio, Victor Barrera, Jr, Jase and Logan Brooks; great-grandfather of Julian, Victoria and Isabella Shustar; dear brother to Anna(Jack) Schweder, Arlene(Joseph) Yourek, Donna(James) Maza and the late Sesto DiGrazia. He is also survived by many nieces and nephews. Ron and Betty resided in Glen Ellyn, IL for 45 years before moving to Texas for warmer weather and “grandparent duties.” Ron was a man of many talents and passions. After high school he enlisted in the US Navy where he proudly served as a Corpsman aboard the USS Wisconsin until his discharge in 1960. He cherished his time in the military and was always willing to share a story or event that happened onboard his “battleship.” Not long after his discharge he was forced by a friend to attend a Jack and Jill steak fry which turned out to be the best night ever, as he met the love of his life, Betty. The two courted for about 10 months and were married in 1963. Not long after, they began their family while he worked as a store manager for National Tea, A&P, PharMor, and finally Pop In. His family and children were his life. After his late night dinners like Wednesdays “pasta and Paisano night” he could be found quizzing his daughters for tests and reminding them that “Knowledge on the tip of your tongue wouldn’t be helpful if they couldn’t put it on paper.” To say he was a sports enthusiast was an understatement as he couldn’t have danced the “Superbowl Shuffle” with any more rhythm than when his Bears won the Superbowl in ‘86, and sung “Go Cubs Go,” when his Cubbies won the World Series in 2016. He didn’t stop at professional sports though, as he could be found on the field coaching his grandchildren’s teams at younger ages and cheering from the stands as they performed at the high school and college levels in football, baseball and cheerleading. This generous, kind soul always wanted to help others. He cared for Betty as her health declined, insisting on being by her side at all times. He would shop for everyone when they were working or shuttle his grandchildren to school, Religious Ed, practices and doctor’s appointments to make everyone else's life easier. Please keep our family in your thoughts and prayers as we mourn the loss of such a wonderful man. Funeral services will begin Friday, September 10, 2021 at 9:30 AM from THE DALEIDEN MORTUARY to Holy Angels Catholic Church for Mass at 10:00 AM. Fr. Michael Lavan will officiate. Interment with Military Honors at 1:00 PM at Queen of Heaven Cemetery in Hillside, Illinois. Visitation will be Thursday, September 9, 2021 from 3:00 PM until 7:00 PM at THE DALEIDEN MORTUARY, 220 North Lake Street, Aurora, Illinois. 630-631-5500. Due to Covid-19 pandemic protocols, social distancing and face masks are required for those in attendance.

Ronald Harry DiGrazia, 84 passed peacefully September 2, 2021 at home in San Antonio, TX, surrounded by his family. He was born January 21, 1937, to the late Adeline Farley and Enrico DiGrazia in Chicago, where he spent most of his childhood.... View Obituary & Service Information

The family of Ronald Harry DiGrazia created this Life Tributes page to make it easy to share your memories.

Send flowers to the DiGrazia family.