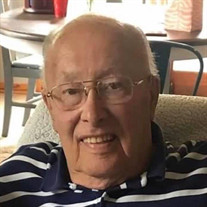 Robert E. Schwartz, 81, of Montgomery, died Sunday, November 21, 2021. He was born June 22, 1940, in Aurora, IL, to Harry and Eula Mable (Satterlee) Schwartz. Bob attended St. Nicholas Catholic grade school in Aurora and Marmion Military Academy in Aurora graduating in 1958. Bob served in the United States Army from 1963-1965 stationed in West Germany. He married Beverly C. McGinn on April 12, 1969, at St. Nicholas Catholic Church in Aurora, IL and enjoyed 51 years of marriage. From 1958-2016, Bob was a draftsman for Aurora Pump, National Hydro, Walker Processing and Amwell Corporation. He was awarded two patents for his designs by the United States government in 1994. Bob was a baseball player as a child and adult. In the 1960’s and 1970’s, he played fastpitch baseball for the Luxembourger and Tiger Club in Aurora. He was a lifelong fan of the Chicago White Sox. He also maintained a large collection of books, stamps, and coins. Bob is survived by five sons Mark (Rebecca) of Montgomery, Stephen (Amy) of Aurora, Matthew (Julie) of Rockford, David (Emily) of Rockford and Thomas of South Elgin; Nine grandchildren Lucy, Neal, Michael, Dominic, Will, Gabriel, Liam, Nora, and Samuel; One brother, William, of Williams Bay, WI; One sister-in-law Christine (Robert) Pfohl as well as several nieces and nephews. Bob enjoyed many lifelong friends most especially the late Paul Hilger, his wife Jean and family. Bob was preceded in death by his wife, Beverly, and his parents. Visitation will be Friday morning, November 26, 2021 from 10:00am until 12:00pm at THE DALEIDEN MORTUARY, 220 N. Lake St., Aurora, 630-631-5500. A funeral Mass will take place at St. Anne Catholic Church in Oswego where everyone will meet directly at the church at 12:30pm on Friday, November 26, 2021. Fr. John Ouper will officiate with interment at Lincoln Memorial Park. Please visit our website at www.daleidenmortuary.com where you may leave condolences for Robert’s family. In lieu of flowers, memorial contributions may be made to the family.

The family of Robert E. Schwartz created this Life Tributes page to make it easy to share your memories.

Send flowers to the Schwartz family.