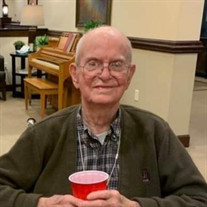 Robert (Bob) T. Olson, age 97, of Aurora, passed away on March 23rd, 2020 at Amita Mercy Medical Center in Aurora, IL. He was born June 5th 1922, in Stevens Point, Wisconsin, the son of Anton T. and Nina (Chenevert) Olson. Bob was a graduate of the University of Wisconsin Law School in Madison and was a member of the Wisconsin and Illinois Bar Associations. He worked for Barber Greene Company for many years and retired as Secretary and Corporate Counsel. Thereafter, he was in private practice, “of counsel” with the firm of Murphy, Hupp, Foot, Milke and Kinnally. Bob was a World War II veteran, having served on active duty for five years. As a Combat Engineer, in the 3rd U.S. Army, he was awarded a battle field commission, a Purple Heart, a Bronze Star and five campaign stars. His unit was awarded a Presidential Citation. Throughout his life, Bob enjoyed hunting and fishing. He was a member of the Barber Greene Hunting and Fishing Club and the Lucky 50 Club. Bob was preceded in death by his loving wife of 61 years, Mary Curran Olson and his brother Don Olson of Two Rivers, Wisconsin. He is survived by his six children, Mary (Don) Espen of Mount Vernon, WA., Robert T. Olson Jr of Huntley, IL., Mark (Sunae) Olson of Peachtree City, Ga., Ann (John) Vose of Aurora Il., David Olson (James Bailey) of Cable, Wi., and Christopher (DeLynn) Olson of Aurora, IL.; seven grandchildren, Mary Sue (Matt) Harfoot of River Forest, IL., Joanne (Autumn Neubert) Olson of Springfield, IL., Matthew (Christi) Vose of Aurora, IL., Emily Vose of Sugar Grove, IL., Timothy Vose of Aurora, IL., Margaret (Diego) Rocha of Chicago, IL., Thomas Olson of Aurora, IL., and five great grandchildren, Patrick and Lily Harfoot of River Forest IL., Lincoln and Sloane Neubert of Springfield, IL. and Elle Vose of Aurora, IL. A memorial visitation and mass will be held at a later date. The family would like to thank the healthcare workers at Amita Mercy Medical Center for all their help and compassion while during this time. Arrangements are being handled by DALEIDEN MORTUARY 220 North Lake Street, Aurora, Illinois 60506 (630) 631-5500. Please visit our interactive website at www.daleidenmortuary.com for further information about Robert’s services and to sign the guest book or leave condolences for his family.

The family of Robert "Bob" T. Olson created this Life Tributes page to make it easy to share your memories.

Send flowers to the Olson family.