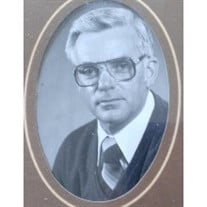 Richard W. Forrestal was born in Waukegan on February 29, 1924 and passed away peacefully of natural causes on Sunday, December 6, 2020 at the age of 96 at his home in Aurora, IL surrounded by family. After graduating from East Aurora High School, he proudly served in the U.S. Army as an US Army Communication Specialist. He had the special honor of being on duty when he received the message that the Japanese had surrendered and he passed the message onto Washington, DC via Morse Code. After 40 years at ComEd, Richard retired and looked forward to his annual trips to Hayward, WI to go musky fishing, which he had done since the 1950's. He and Wanda spent most of their evenings socializing over drinks and dinner all over the Aurora area. He will be remembered for his sense of humor, positive outlook on life and genuine kindness. He is survived by his wife Wanda, Granddaughter Tracy (Ed) Oliva of Arizona, Grandson's Todd (Karma) Forrestal of Batavia, Jason (Sandra) Forrestal of Austria, Patrick Keller of Aurora, & Mike (Denise) Keller of Ireland. Niece Leanne (Chuck) Kroen and Kerri. Great Grandchildren Jayden Forrestal, Phillip & Josephine Heidkamp and Eamon Keller, Amanda, Eric & Brandon Otten. He is also survived by his extended family from his marriage to Wanda: Daughter Lisa Hahn of Yorkville. Son, Barry (Susan) Kimes of Yorkville and grandchildren Kristen (Andy) Langston, Kimberly Jones, Keri Phillipp, Jeremy (Laura) Hahn, Robert (Kendra) Hahn & Craig (Nikki) Hahn and many great grandchildren. He is preceded in death by his first wife Bette Shufelt, Son Richard Forrestal, Daughter-in-law Carol (Boitor) Forrestal, Daughter Linda Keller, Son-in-law Ed Keller, his Sister Ruth Baker, & Step-son David Kimes. Memorial service will be held at a future date. Arrangements are being handled by THE DALEIDEN MORTUARY 220 North Lake Street Aurora, Illinois 60506. (630) 631-5500 Please visit our website at www.daleidenmortuary.com where you may leave condolences for Richard's family.

Richard W. Forrestal was born in Waukegan on February 29, 1924 and passed away peacefully of natural causes on Sunday, December 6, 2020 at the age of 96 at his home in Aurora, IL surrounded by family. After graduating from East Aurora High... View Obituary & Service Information

The family of Richard W. Forrestal created this Life Tributes page to make it easy to share your memories.

Send flowers to the Forrestal family.