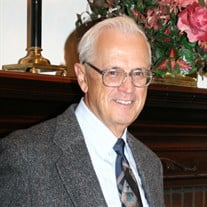 Richard J. Brouch, 87, of Aurora, passed away on January 2, 2020 at Symphony at the Tillers in Oswego, IL. He was born May 31, 1932 in Aurora, IL. Richard was a lifelong resident of Aurora area. He graduated from Marmion Military Academy in 1952 and also graduated from Aurora College. Richard served in the U.S. Army from 1952-1954. He married Helen on May 4, 1957 in Joliet, IL. Richard was employed at Western Electric which is now, Lucent Technologies for 31 years until his retirement in 1984. He is survived by his daughters Linda (Mike) Christie of Aurora, Jane (Robert) Pauls of Sugar Grove, Debbie (Christopher) Kottkamp of North Aurora, Carol (Mark) Lee of Wildwood, MO, Mary (Patrick) Huff of Aurora; his son Paul (Eliza) Brouch of Aurora; his sisters Joan Cetto of Phoenix, and Virgina Brouch of Phoenix; 18 grandchildren Sean Christie, Kim Christie, Anna Pauls, Catherine (Mike) Tucker, Bernadette Pauls, Anthony Pauls, Grace Pauls, Elizabeth Kottkamp, Dan (Jessica) Kottkamp, Aimee Lee, Robyn Lee, Mikaela Lee, Amanda Huff, Rachel Huff, Ryan Huff, Matthew Brouch, and Kevin Watson; three great grandchildren Liliana and Kaladin Kottkamp and Aubrey Tucker. He was preceded in death by his wife Helen Brouch; his parents Louise (Brummel) and John Brouch; his granddaughter Monica Pauls; his brother Chuck Brouch; and his sister Sr. Grace, OSF. Funeral from THE DALEIDEN MORTUARY will be on Tuesday, January 7, 2020 at 9:30am to St. Joseph Church at 10:00am. Fr. Jerome Leake will officiate. Inurnment will be at a later date. Visitation will be on Monday, January 6, 2020 from 4:00pm until 8:00pm with a liturgical wake service at 4:00pm at THE DALEIDEN MORTUARY, 220 N. Lake St., Aurora, 630-631-5500. Please visit our website at www.daleidenmortuary.com where you may leave condolences for Richard’s family. Memorial contributions may be made in Richard’s memory to St. Joseph Church.

Richard J. Brouch, 87, of Aurora, passed away on January 2, 2020 at Symphony at the Tillers in Oswego, IL. He was born May 31, 1932 in Aurora, IL. Richard was a lifelong resident of Aurora area. He graduated from Marmion Military Academy in... View Obituary & Service Information

The family of Richard J. Brouch created this Life Tributes page to make it easy to share your memories.

Send flowers to the Brouch family.