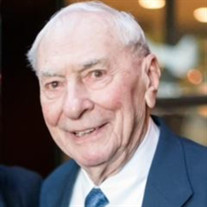 Raymond John Simonek, 89, of Aurora, Illinois passed away Monday, March 30, 2020. He was born November 9, 1930 in Chicago, Illinois. On January 7, 2020, Ray lost his devoted and loving wife of 64 years, Dolores (Partyka) Simonek. Ray is survived by his four children, Donna (Christopher) Mangold, Terese (Hugo) Gravenhorst, Karen (Richard) Karas, and Richard (Julie Ryan) Simonek; grandchildren Abigail (Ian) Gravenhorst Strug, Meredith (Ryan) Mangold Gildersleeve, Eleanor Gravenhorst, Ricky Karas, and Phillip Karas; his sister Aggie (Warren) Frolik; and many nieces, nephews and friends. Ray was preceded in death by his parents, Charles and Mary (Chrastil) Simonek, and seven of his siblings, Irene, Evelyn, Dorothy, Florence, Charles, Mary Jane and Monica, and his beloved Dolores’ parents Stanley and Stella Partyka, and her brothers Richard and Gerald. Ray proudly served his country in the United States Army in post-war Germany, followed by a long career in accounting and finance in private industry, local government and nonprofit organizations. He was active in the National Association of Accountants, serving as the Fox River Valley chapter president and a national director. Ray was a gifted singer with a tenor’s voice. He began singing in grade school and continued singing well into his eighties as a cantor with Our of Lady of Mercy church, where Ray and Dolores were founding members. After retiring as Director of Finance from the Kane County Regional Office of Education, Ray was home for two months and decided that retirement was not for him. He continued working part-time in the field of accounting for another twelve years, and officially retired in 2010 at the age of 80. Ray was a people person and wanted to share his knowledge and experiences with others, so a few months after “retiring,” he became a volunteer tutor at the adult literacy and reading program at Waubonsee Community College, where he taught writing skills to English as a Second Language students. Ray and Dolores moved to Fox Knoll Assisted Living in Aurora in 2016, where Ray organized and led a lively current events discussion for residents and was an enthusiastic member of the community’s sports teams. Ray’s family wishes that they could have given him the great send-off that he deserved, but that is not possible with the current pandemic. We encourage family and friends to visit Daleiden’s interactive website at www.daleidenmortuary.com where you may sign the guest book and leave condolences for Ray’s family. Ray will be interred at Risen Lord Cemetery in Oswego, Illinois. Memorial contributions in Ray’s name may be made to the Rush-Copley Cancer Center at https://www.rushcopley.com/giving/gift/. Please indicate that the gift is in memory of Raymond Simonek, and designate the Cancer Center in the drop down.

The family of Raymond J. Simonek created this Life Tributes page to make it easy to share your memories.

Send flowers to the Simonek family.