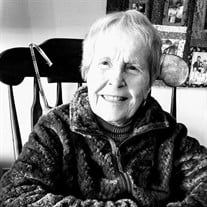 Patricia (Pat) Brennan Abell, age 96, passed away peacefully at home on Nov. 19, 2019. Pat was born on August 12, 1923 in Omaha, Nebraska, the daughter of William and Nell Brennan. Pat and her 5 siblings were raised in Omaha, where she attended Creighton University Nursing School. Pat went on to proudly serve as a nurse in the United States Navy. While stationed in San Diego, Pat met her husband-to-be, Jack Abell, who was then a Navy doctor. Jack and Pat were married on Nov. 15, 1947. They settled in Aurora, Il, Jack’s hometown, where they became active members in the community. Jack and Pat were married for 64 years. Pat’s greatest joy and blessing was her strong Catholic faith. She actively lived her faith, evangelizing her Christian values with love and compassion. She and Jack were longtime active members of Holy Angels Parish, where Pat served in many capacities. Pat was also an active member in the Mercy Center Hospital Auxiliary. Pat devoted her life to her husband and children. She lovingly cared for Jack through an extended illness until his death in 2012. Pat is survived by her four children: Mike (Janice) Abell, Martha (Richard) Rode, Theresa (John) Bryant, and Tim Abell; her 9 grandchildren: Cameron (Lacey) Abell, Tim (Jenna) Rode, Patrick Bryant, Michael Bryant, Michaela (Jeff) Finley, David Bryant, Jeffrey Abell, Nathan Abell, and Mary Kate Bryant; two great grandchildren: Kevin Abell and Eleanor Rode, her sister-in–law Dorothy; and many beloved nieces and nephews. Pat was preceded in death by her siblings, her husband Jack, and her grandson Kevin Bryant. The Abell family would like to thank Advocate Hospice for their care and support for Pat during the past several weeks. They would also like to thank her community and friends at Edgelawn West, who she truly enjoyed living among. Last but not least they would like to thank Tim and G., and Tameika who lovingly took care of Pat with compassion, empathy and humor! Visitation will be held on Sunday Nov. 24, 2019 from 4:00pm until 7:00pm with a liturgical wake service at 4:00pm at THE DALEIDEN MORTUARY, 220 N. Lake St. Aurora, IL 60506. A funeral Mass will be celebrated on Monday Nov. 25, 2019 at 10:00am at Holy Angels Church, 120 S. Lancaster Ave. Aurora, Il 60506. Fr. Michael Lavan will officiate with interment at Mt. Olivet Cemetery, 278 Ashland Av. Aurora, Il 60506. Please visit our interactive website at www.daleidenmortuary.com where you can leave condolences for Pat’s family. In lieu of flowers, memorial contributions in Pat’s memory may be made to the Holy Angel’s Food Pantry, Waterleaf Women’s Center or the Alzheimer’s Association.

Patricia (Pat) Brennan Abell, age 96, passed away peacefully at home on Nov. 19, 2019. Pat was born on August 12, 1923 in Omaha, Nebraska, the daughter of William and Nell Brennan. Pat and her 5 siblings were raised in Omaha, where she attended... View Obituary & Service Information

The family of Patricia "Pat" Abell created this Life Tributes page to make it easy to share your memories.

Send flowers to the Abell family.