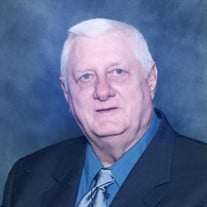 Oswald “Ozzie” Sepavich, 90, of Aurora, passed away peacefully Tuesday, February 19, 2019 at Bright Oaks of Aurora. He was born July 27, 1928 in Aurora, IL, to Peter and Afemia (Kackis) Sepavich and was a lifelong resident of Aurora. Ozzie attended East Aurora Schools and graduated from East Aurora High School in 1945. He was also a member of the class of 1946 and attended Aurora College, He was drafted during the Korean Conflict and served with the U.S. Army Real Estate Division of the Japanese Logistical Command in Yokohama. He was a draftsman at various firms including Barber-Greene, The Straits Company and retired from CBI/Walker Process in Aurora. He married Helen Bonds in 1958 at The St. Maurice Church in Chicago. He enjoyed traveling throughout the United States, especially to Las Vegas, NV and Branson, MO. He enjoyed writing and investigating his family genealogy. After he retired he took three trips to Lithuania to gain further knowledge of his past and to visit and learn about his relatives there. While there he commissioned a lead glass window in the Old Church in Zagare, Lithuania to commemorate an ancestor believed to be a saint that lay in state there. Her body disappeared during the Soviet occupation. He was a member of Holy Angels Church, the Turner Club and The Yorkville American Legion Post. He is survived by his daughter, Carolyn (the late Dan) Waitt and granddaughter, Lauren Waitt; his son, Joel (Alison) Sepavich and grandson, Zachary Sepavich; and numerous nieces and nephews. He was preceded in death by his wife, Helen; his son, Karl Sepavich in infancy; his parents and his immediate family of Sigmund Tarvid, Josephine (Tarvid) Wampach York and Euphemia (Tarvid) Leverich. The family would like to thank the staff of Bright Oaks of Aurora and Divine Hospice and Palliative Care for their loving care in his final days. Funeral services will be held Saturday, February 23, 2019 at 12:00 PM at THE DALEIDEN MORTUARY; Interment will follow at Mt. Olivet Cemetery. Visitation will be held Saturday, February 23, 2019 from 10:00 AM until 12:00 PM at THE DALEIDEN MORTUARY, 220 North Lake Street, Aurora, Illinois 60506. (630) 631-5500. Please visit our interactive website at www.daleidenmortuary.com where you may sign the guest book or leave condolences for Ozzie’s family. The family requests donations be made to Aurora University towards scholarships in his memory.

The family of Oswald P. Sepavich created this Life Tributes page to make it easy to share your memories.

Send flowers to the Sepavich family.