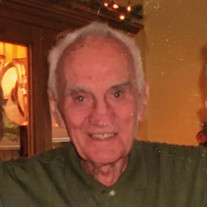 Nick Schuetz, 98, of Aurora, IL passed away Saturday, January 11, 2020. He was born January 18, 1921 in Lovrin, Romania to Nikolaus and Katherina Schütz. He was united in marriage to Maria M. Matheis on September 24, 1949 and they spent 49 years together. They were proud members of Donauschwaben German Club. He was a member of St. Joseph Church. Nick and Maria immigrated to the United States in 1955 with two young boys. Initially, they settled in Mendota, IL. Nick was employed by Don L. Dise, Inc. building homes in Boulder Hill, IL. This led to his career working for Banks & Wegman Builders and then later, R.C. Wegman Construction as a union carpenter. Chic and Emma Wegman became lifelong friends even living next to each other at Fox Knoll. Nick was known for his quality craftsmanship, loyalty, and work ethic. Nick enjoyed music very much. He played many instruments, especially the accordion and saxophone. It was while his band was playing at a dance that he was introduced to Maria. Nick also was quite an athlete, excelling in track & field, soccer, boxing, and he was an avid chess player. He enjoyed watching his children and grandchildren participate in their sports. He is survived by his three sons, Roland, Reinhold (Blair), and Rudy (Martha); his 8 grandchildren Aerial (Michael) Anger, Nik (Erin) Redmond, Nik, Emily, and Nolan Schuetz, Stephanie (fiancé Nick DeLeon), Phillip, and Evan Schuetz; and three great grandchildren Olivia Anger, Claire and Tom Redmond. He was preceded in death by his wife Maria; his parents Katherina and Nikolaus Schütz; and his sister Katherina Streckfuss. Funeral Mass will be held on Friday, January 17, 2020 at 12:00pm at St. Joseph Church. Fr. Matthew McMorrow will officiate with interment at St. Joseph Cemetery. Nick will lie in state at St. Joseph Church on Friday morning from 10:00am until the funeral hour at 12:00pm. Arrangements are being handled by THE DALEIDEN MORTUARY, 220 N. Lake St., Aurora, 630-631-5500. Please visit our interactive website at www.daleidenmortuary.com where you may leave condolences for Nick’s family. In lieu of flowers, memorial contributions may be made in Nick’s memory to St. Joseph Church, 722 High St., Aurora, IL 60505

The family of Nick Schuetz created this Life Tributes page to make it easy to share your memories.

Send flowers to the Schuetz family.