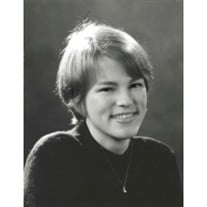 Merrilee Lubshina, 72, of Aurora, passed away Thursday, June 24, 2021, at AMITA Mercy Medical Center in Aurora, surrounded by her family. She was born March 11, 1949, in Ottawa, Illinois, to Truman and Betty (Breitenkamp) Meling. She married Gerald Lubshina on July 11, 1970, at St. Columba Church in Ottawa. Merrilee was a beloved wife and mother and will be greatly missed by her family. She was a certified dental assistant and had worked for various dentists in the Aurora area. Prior to this, she attended Ottawa Public Schools and graduated from Ottawa Township High School in 1967. She briefly attended the University of Illinois; later, she attended Waubonsee Community College studying cultural anthropology and loved her experience studying at a field school in Mérida, Mexico. Merrilee was baptized and raised in the Evangelical United Brethren Church until she converted to The Church of Jesus Christ of Latter-day Saints at age 18. Merrilee had a beautiful voice, and enjoyed singing in her high school choir and in a music group in Wyoming. She also enjoyed gardening, reading sci-fi and mystery novels, as well as listening to her favorite artist John Denver. She was preceded in death by her parents and her sister, Gloria Mason. Survivors include her husband of more than 50 years, Gerald; four children: Stephanie Lubshina of Arlington Heights, Melanie (Bill) Boehmer of Palatine, David Lubshina of Aurora, and Marie Lubshina of Batavia; two grandchildren: Dakota Boehmer and Joshua Boehmer; three brothers: Gary (Joyce) Meling of Sheridan, Wyo., David (Judy) Meling of Ottawa, Ill., and Robert (Ann) Meling of Tuscon, Ariz.; also, many nieces, nephews and cousins. Memorial visitation will be held Saturday, July 10, from 2:00 until 4:00 p.m. at The Daleiden Mortuary, 220 N. Lake St, Aurora, IL, 60506. 630-631-5500. A memorial service will follow at 4:00 p.m. at The Daleiden Mortuary. Inurnment of cremains will be at Oakwood Cemetery in Ottawa, Illinois, at a later date. The family has designated the Aurora Interfaith Food Pantry for memorial contributions.

Merrilee Lubshina, 72, of Aurora, passed away Thursday, June 24, 2021, at AMITA Mercy Medical Center in Aurora, surrounded by her family. She was born March 11, 1949, in Ottawa, Illinois, to Truman and Betty (Breitenkamp) Meling. She married... View Obituary & Service Information

The family of Merrilee Lubshina created this Life Tributes page to make it easy to share your memories.

Send flowers to the Lubshina family.