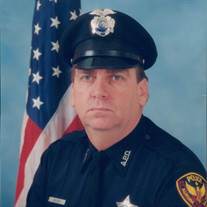 Marshall E. “Gene”, “Sheik” Gauer passed away peacefully at home on Friday, December 14, 2018, with his family at his side. “Sheik”, as known by all, fought with all he had to try and beat his cancer. He was born September 14, 1946 to Marshall C. and Clara Fay (Sherman) Gauer. Gene spent his career in law enforcement, first with the Aurora Police Department for 34 years and later with the Campton Hills Police Department. It was a career he enjoyed, worked hard at, and was very proud of. Gene’s motto throughout his career was simple, treat people with respect. When not working, Gene enjoyed sports of all kinds, mostly golfing, bowling and baseball. He was a Chicago sports fan, but most enthusiastic about the Cubs. Gene was everyone’s “coach”. If you didn’t get a lesson from Gene, you probably never played the sport. For many years, Gene volunteered for the Special Olympics Torch Run Golf outing. It was an event near and dear to his heart. He will be deeply missed by his wife Deborah (Warner), daughter Allyson (Michael) Carey, sister-in-law Kelly (Darrin) Tackitt, brothers-in-law William (Duvonna) Warner, Patrick (Rosa) Warner, Timothy (Dana) Warner, brother Charles (Julie) Gauer and his nieces and nephews. Family and friends were an important part of his life. Gene was blessed to have many friends. He depended on the encouragement and support of those around him. Gene was preceded in death by his parents, his mother and father-in-law, Eugene and Shirley Warner, and nephew Caleb Warner. Gene had a giving heart particularly for children. In lieu of flowers, he would like you to make a donation to the Special Olympics (Law Enforcement for Special Olympics, 605 E. Willow, Normal IL. 61761 in honor of Gene Gauer) or St. Jude Children’s Hospital. “Sheik” sends his final message to his brothers in blue, “Hey Rookie, be safe out there”. Funeral services will be held Wednesday, December 19, 2018, at 9:30 AM from THE DALEIDEN MORTUARY to Holy Angels Catholic Church at 10:00 AM; Fr. Jerome Leake will officiate with interment to follow at Mt. Olivet Cemetery, in Aurora, IL. Visitation will be held Tuesday, December 18, 2018, from 4:00 PM until 8:00 PM at THE DALEIDEN MORTUARY, 220 North Lake Street, Aurora, Illinois 60506. (630) 631-5500. Please visit our interactive website at www.daleidenmortuary.com where you may sign the guest book or leave condolences for Gene’s family.

The family of Marshall "Gene" Gauer created this Life Tributes page to make it easy to share your memories.

Send flowers to the Gauer family.