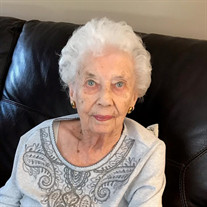 Marcella M. Nebel, age 98, formerly of Aurora, IL passed away peacefully on Friday, October 11, 2019 at Hillside Rehab and Care, Yorkville, IL. She was born September 20, 1921 in Aurora, Illinois the daughter of Theodore and Mary (Gengler) Hess. She was a graduate of Madonna High School in Aurora, IL and on May 13, 1944 she was united in marriage to Alfred Nebel. She spent the majority of her life raising their daughters. She is survived by her daughters, Judy Heim of Millbrook, IL, Jean (Vince) Trotto of Aurora, IL; her four grandchildren, John (Kristen) Trotto, Christine (Michael) Viggiani, Erin Maple, Megan (Matthew) Ritter; six great grandchildren, Liam Frost, Madeline Trotto, Zachary Trotto, Benjamin Maple, Paxton Maple, Finnley Ritter; her sister-in-law, Marilyn Hess; also mourning her loss are Abbi and Snowstorm, her furry granddogs whom she loved. She was preceded in death by her husband, Alfred Nebel; her parents, Theodore and Mary (Gengler) Hess; her brother, Carl Hess; and her son-in-law, Robert Heim. Visitation will be held Tuesday, October 15, 2019 from 4:00 PM until 7:00 PM at THE DALEIDEN MORTUARY, 220 North Lake Street, Aurora, Illinois 60506. (630) 631-5500 Morning visitation will be held Wednesday, October 16, 2019 from 9:00 AM until 10:00 AM at THE DALEIDEN MORTUARY prior to funeral procession to River Hills Memorial Park for interment. In lieu of flowers the family respectfully requests donations in memory of Marcella be directed to Plum Landing, 495 North Lake Street, Aurora, IL 60506, where she lived for several happy years. Please visit our interactive website at www.daleidenmortuary.com where you may sign the guest book or leave condolences for Marcella’s family.

The family of Marcella M. Nebel created this Life Tributes page to make it easy to share your memories.

Send flowers to the Nebel family.