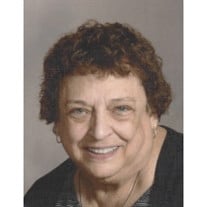 Lynida Hanson was born on March 13, 1946 on the South side of Chicago and grew up in the Mount Greenwood community. She was the oldest of four children born to Adolph and Armida (Krewson) Hanson. She attended Chicago Public Schools and Western Illinois University, and became a supervisor in the Book Division at Time-Life in downtown Chicago. She shared her family's passion for the Cubs, camping and, oddly, Volkswagens. It was at a Volkswagen Club event where she met Shell Tomlin and, after a 6-year courtship, the couple married on October 6, 1973 at Calvary Lutheran Church in Chicago, where Lynida had been baptized and confirmed in her youth. They lived in Cicero, IL for 2 years, then moved to Aurora, to be closer to Shell's work, and joined St. Mark's Lutheran Church. She then left Time-Life to raise two children, a daughter and a son. Later, she put her knack for figures to work again as the Bookkeeper at a West Aurora Middle School until retiring in 2011. She loved reading (always had her Kindle nearby), collecting commemorative coins and Coca-Cola memorabilia. It would become a tradition that the family would spend their vacation time camping, having set up their pop-up trailer in each of the 48 contiguous states as well as several Canadian Provinces over the years. In 2003, however, the couple participated in a St. Mark's tour to Germany to follow the life of Martin Luther, and took a side trip to the Volkswagen Factory in Wolfsburg. After her son moved to the UK in 2008, she took advantage of his knowledge of Europe and together they traveled to England, France, Switzerland, Italy and eventually Sweden, the home of her ancestors. Lynida passed on March 6, 2021 and is survived by her husband Shell, a son Erik, a brother Gary Hanson, a sister Kimberlee (John) Curtis and several nieces and nephews. She was preceded in death by her parents, her daughter Lisa Tomlin and brother Rodney Hanson. A memorial service will be held Saturday, June 19, 2021 at 11:00am at St. Mark's Lutheran Church, 27 S. Edgelawn Ave., Aurora, IL 60506. Inurnment will also take place following the service at St. Mark's Lutheran Church. Arrangements were handled by THE DALEIDEN MORTUARY, 220 N. Lake St., Aurora, 630-631-5500. Please visit our website at www.daleidenmortuary.com where you may leave condolences for Lynida's family. Memorials in Lynida's honor may be made to the American Diabetes Association.

Lynida Hanson was born on March 13, 1946 on the South side of Chicago and grew up in the Mount Greenwood community. She was the oldest of four children born to Adolph and Armida (Krewson) Hanson. She attended Chicago Public Schools and Western... View Obituary & Service Information

The family of Lynida Hanson Tomlin created this Life Tributes page to make it easy to share your memories.

Send flowers to the Tomlin family.