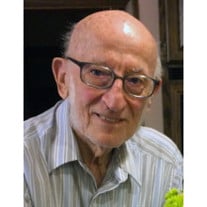 Leroy Sachen lived his 95 years in Aurora, Illinois. He attended St. Joseph's school and then attended Aurora East High School. After his sophomore year he worked to help support his family. Soon he was drafted into the Navy during WWII with submarine duty. After the war, Leroy attended Aurora College, where he met his loving wife Wilma. After graduating with a business degree from Aurora College, Leroy had jobs as bookkeeper, accountant and many more. Always a hard worker, at one point, he was known to have worked three jobs at a time. Leroy was an entrepreneur extraordinaire. He started his own business in 1954 called L & S Sales Company, where he would buy and resell items. His favorite reseller story was when he bought many 50-gallon barrels of brown paint. He persuaded some farmers to paint their barns brown instead of red, and both parties were satisfied. He briefly moved, seasonally, to Paducah Kentucky, in the 1950s, where he and his wife purchased and operated an A & W Root Beer stand. In 1960, Leroy opened his real estate business where he developed several subdivisions, built hundreds of quality homes and managed rental units. His son Joe, who worked with him in the family real estate business, often said of Leroy, "I learned from Dad that the best way to make money in real estate is to own it." Leroy also said, "I don't mind paying income taxes because I earned it and don't mind paying real estate tax because I own it." Leroy never retired and stayed active in business until the month of his 94th birthday when a devastating bout with double pneumonia slowed him down. Leroy played football at Aurora College. Very athletic, he played fast pitch softball for May Jewelers and one season hit a walk off home run to beat the Sealmasters. For fun, Leroy used to throw a baseball into the air so high it was hardly visible. His son Joe and daughter Jackie would take turns catching the ball. Leroy's Sachen Realty bowling team won a league championship the year he also received a trophy for high game. He was an avid sports fan, enjoyed fishing trips to Canada with his friends, and loved playing cards. Leroy also enjoyed playing Scrabble, and he rarely played a game without a 7-letter word. He played Scrabble right into his 95th year. Leroy and wife Wilma enjoyed traveling throughout the United States with their children. Leroy and his wife also traveled to many countries in Europe. Leroy was President of the Aurora Board of Realtors in 1967. He was a member of Aurora Noon Lion's Club, Moose, Third Liard Club, Phoenix Club, and American Legion. He was a very generous man, consistently donating significant amounts to charitable organizations, churches, and universities. Always big-hearted and interested in people, Leroy had a great outlook on life. In his younger years he used to say, "If you don't have anything nice to say, don't say anything at all." Later on in his office, Leroy posted the saying, "It's easier to do a task than to explain why you didn't." We will all miss Leroy's smile, his joke telling, his love of life, and most importantly, his devoted love for his son, daughter, grandchildren and great-granddaughter. Leroy was preceded in death by his mother Anne Rausch Sachen and his father John Sachen; his siblings Joseph Sachen, Mary Osman, Robert Sachen, Gertrude Ream; his wife Wilma Quartly Smyth Sachen; his daughter-in-law Mary Pierceall; as well as other dear family and friends. He is survived by his two children: son Joseph and daughter Jackie (Charles Turner); his three grandchildren Brandy Wegman, Kyle Turner and Kevin Turner; his great-granddaughter Brooke Wegman; sister-in-law Gwendelyn Hughes; and many nieces and nephews. In lieu of flowers, memorial donations in Leroy's memory may be made to Aurora University and St. Joseph's Catholic Church. Private burial of cremains will be held at a later date. Funeral arrangements are being handled by THE DALEIDEN MORTUARY 220 North Lake Street, Aurora, Illinois 60506. For further information and to leave condolences for Leroy's family please visit www.daleidenmortuary.com

Leroy Sachen lived his 95 years in Aurora, Illinois. He attended St. Joseph's school and then attended Aurora East High School. After his sophomore year he worked to help support his family. Soon he was drafted into the Navy during WWII with... View Obituary & Service Information

The family of Leroy J. Sachen created this Life Tributes page to make it easy to share your memories.

Leroy Sachen lived his 95 years in Aurora, Illinois. He attended...

Send flowers to the Sachen family.