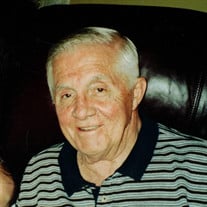 LeRoy G. “Lee” Fichtel, 94, passed away Thursday, March 10, 2022 at Sunnymere Senior Living. He was born January 7, 1928 in Aurora, Illinois. He was one of the last of the greatest generation that we all learned so much from. LeRoy was a proud U.S. Army veteran of the Korean War. He was a lifelong Aurora resident and attended Sacred Heart Grade School and Marmion Military Academy graduating in 1946. He played minor league baseball in 1950-51 for the Mount Vernon Kings in Illinois. After his return from playing baseball he worked at Thor Power Tool. He then worked in sales for many years at Aurora Pump retiring in 1991. After his retirement you could find him working in the tool section at the Lake Street Ace Hardware. Because of his love of horse racing he would spend his free time at Aurora Downs in the 1970’s, the OTB in the 1980’s and then the Turf Room in later years to place his bets and hang out with his friends who enjoyed racing as much as he did. Later in his betting days, he would bring the Turf Room tellers his homemade oatmeal chocolate chip cookies. LeRoy was a very kind man however when it came to sports he was a very passionate man. He could be heard yelling at the refs from the balcony of his sons West Aurora basketball games in the late 1970’s. That passion was reborn in the 2000’s when he once again bantered with the refs at his grandson’s games. He was a man who taught us many loves, of faith, of sports (especially the Cubs), of children and of family. He is survived by his three children, Dawn (Stanley) Wallace of Memphis, TN, Jeff (Margo) Fichtel of Omaha, NE, Laura (Mike) Pall of Aurora, IL; six grandchildren, Haley Fichtel, Carson Fichtel, Matthew Pall, Ryan Pall, Gabrielle Pall, Joe Pall; many nieces and nephews. He was preceded in death by his wife of fifty years Grace (Smith) Fichtel; his parents, Fred and Mary (Hiemenz) Fichtel; four sisters, Lillian Strusz, Audrey Weingartner, Shirley Nilges, Betty Little; two brothers, Edwin “Bud” Fichtel, Herman Fichtel. LeRoy’s family would like to thank the caregivers and his close friends at Sunnymere where he lived the past two years. The love they had for him was so very comforting to the family. Funeral services will be held Friday, March 18, 2022 at 9:15 AM from THE DALEIDEN MORTUARY to Blessed Sacrament Church at 10:00 AM; Fr. Max Lasrado will officiate. Interment will be private. Visitation will be held Thursday, March 17, 2022 from 3:00 PM until 7:00 PM at THE DALEIDEN MORTUARY, 220 North Lake Street, Aurora, Illinois 630-631-5500. Please visit our website at www.daleidenmortuary.com where you may leave condolences for LeRoy’s family.

The family of LeRoy G. "Lee" Fichtel created this Life Tributes page to make it easy to share your memories.

Send flowers to the Fichtel family.