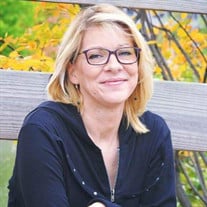 Laurie Ann Mickelberg, age 51, passed away on Thursday, April 18, 2019, surrounded by her family and friends, after a long and courageous battle with cancer. Laurie was born October 24, 1967 in Aurora, Illinois to Lavonne (Held) Burkhart and William J. Mickelberg. After graduating from West Aurora High School in 1985, Laurie went on to raise a daughter as a hard-working, single mother and welcomed a granddaughter in 2008 who she called "Lolo Monkey" and always described as her "best friend". Laurie leaves to cherish her memory her mother, Lavonne Burkhart; daughter Kelly Mickelberg; granddaughter, Lauren Mickelberg; "special son" Skyler (Zoe) Sherwin and their daughter, Amelia; sisters Kim (Joe White) and Kathy (Bob Mater) Hussey of Nashville, TN; dear friends Shannon and Dave Savini and Mark Strausberger. Also survived by many aunts, uncles, cousins, a host of friends, and her beloved animals, Fiona and Opie. Laurie was predeceased by her father, William J. Mickelberg; her stepfather, Roland Burkhart; her Aunt Linda (Held) Ryan; and her maternal and paternal grandparents. Those who knew Laurie will always remember her infectious laugh, her wicked sense of humor, her biting sarcasm, her love of music, farmers' markets and garage sales. She believed in equality for all and firmly stood her ground when she felt that was being threatened. If you were going to enter into a debate with Laurie, you better have not only your facts, but also your sentence structure, verb tense and spelling in order. She will be dearly missed by all whose lives she touched. A celebration of Laurie's life will be held Saturday, April 27, 2019 from 1:00 PM until 4:00 PM at THE DALEIDEN MORTUARY, 220 North Lake Street Aurora, Illinois 60506 (630) 631-5500. Any and all "Laurie stories" and pictures are welcome! ***PLEASE OMIT FLOWERS*** A GoFundMe account has been established in Laurie's memory to assist her family (see link below). Any support would be welcome and greatly appreciated. https://www.gofundme.com/paying-tribute-to-laurie

Laurie Ann Mickelberg, age 51, passed away on Thursday, April 18, 2019, surrounded by her family and friends, after a long and courageous battle with cancer. Laurie was born October 24, 1967 in Aurora, Illinois to Lavonne (Held) Burkhart and... View Obituary & Service Information

The family of Laurie Ann Mickelberg created this Life Tributes page to make it easy to share your memories.

Send flowers to the Mickelberg family.