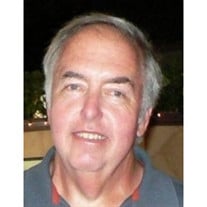 Kenneth A. "Ken" Schmidt, 71 of Aurora passed away Thursday, November 19, 2020 at Seasons Hospice in Naperville. He was born in Aurora on September 24, 1949 to Ralph and Ruth (Frieders) Schmidt, the eldest of 6 children. Ken graduated from Aurora Roncalli High School and owned and operated Ken Schmidt Electric for many years throughout Aurora, Montgomery, and Oswego. In addition to his business, Ken's other passion was his dedication to the Marywood Fire Protection District. Prior to being old enough to drive, he often rode his bike from his Pigeon Hill neighborhood to the Marywood fire station near his grandmother's home, to learn from the firefighters who mentored him. In 1967, at the age of 18, Ken officially joined the fire department. In 1980 following the sudden death of Chief John Schmidt (no relation), Ken was promoted to Chief, a position he held until the Marywood Fire Protection District was dissolved in 1994. Ken was among the kindest and most generous of people, working nearly every day of his adult life. With his electrical skills and experience, he was a pivotal part of the annual Montgomery Fest Weekend and the seasonal Christmas tree lighting ceremony in Montgomery. Among Ken's favorite pastimes was relating "war stories" from his days on the fire department or adventures that he had as an electrician. The camaraderie he shared with other working men was what drew others to him. Ken never knew a stranger. People he didn't know were just friends he hadn't met yet. This was his nature. Ken is survived by his wife, Donna (Leitch), their daughter Jessica (Jason) Pasternak, and two grandchildren, Isabella and Ryan Pasternak, all of whom he loved very much. Ken is also survived by 2 brothers, Dennis (Lyda) Schmidt, Ed (Donna) Schmidt, 3 sisters, Karen Carew, Carla (Lee) Schwendner, Jane (John) Cebulski and 13 nieces and nephews. He is preceded in death by his parents, Ruth and Ralph Schmidt, his brother-in-law, Paul Carew and numerous fond aunts and uncles. Due to current restrictions funeral arrangements will be private. A Celebration of Ken's Life will be held at a later date. In lieu of flowers the family requests that you consider making a contribution in Ken's name to The Waubonsee Community College Foundation. Please direct donations to: The Ken Schmidt Memorial Scholarship for Fire Science Rte 47 at Waubonsee Dr. Sugar Grove, IL 60554 Please visit our website at www.daleidenmortuary.com where you may leave condolences for Ken's family.

Kenneth A. "Ken" Schmidt, 71 of Aurora passed away Thursday, November 19, 2020 at Seasons Hospice in Naperville. He was born in Aurora on September 24, 1949 to Ralph and Ruth (Frieders) Schmidt, the eldest of 6 children. Ken graduated from Aurora... View Obituary & Service Information

The family of Kenneth Schmidt created this Life Tributes page to make it easy to share your memories.

Kenneth A. &quot;Ken&quot; Schmidt, 71 of Aurora passed away Thursday,...

Send flowers to the Schmidt family.