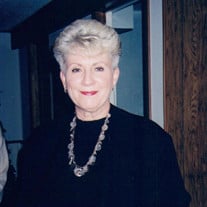 Judith Ann “Judy” Morrison 82, formerly of Aurora, Illinois passed away Thursday, August 26, 2021. Judy was born December 11, 1938, in Aurora. She was a graduate of East Aurora High School, class of 1957. She worked in the temporary help and staffing industry for more than 30 years. As an active member of the community, philanthropy was a huge part of Judy's business and personal life. Judy served three terms as the Alderman of the 5th Ward for the City of Aurora from 1991 through 2003. She was instrumental in the development of both the Orchard Road gateway and Fire Station Number 10, which she took great pride in. Judy was a member of the Aurora Chamber of Commerce for many years, and was the proud recipient of the Chamber's Athena Award, recognizing her contributions to the business community. She was on the Civil Service Commission for the City of Aurora from 2003 through 2015. Other accomplishments include being a past member of the Easter Seals Board, Fox Valley Park District Aquatic Board, Chairperson for Copley's White Cross Ball and a committee member for the Kane County State's Attorney's Office diversified staffing committee. Judy was happily married to Jack Morrison for 54 years, until his death in 2011. Judy is survived by their three daughters: Jill (Dan) Hess, Jacqueline (Craig) Hasenbalg, Jane Morrison; six grandchildren: Jonathan Colyer, Katherine (Derek) Blair, Benjamin Hasenbalg, Anneliese Hasenbalg, Eric Santiago, and Anna Santiago; and two great grandchildren: Cole Blair and Christian Blair. She was preceded in death by her parents, mother Anna Marie Tuma and father Anthony W. Tuma. A memorial visitation will be held for Judy at THE DALEIDEN MORTUARY, 220 North Lake Street, Aurora, Illinois 60506, 630-631-5500, on Sunday, September 19, 2021 from 1:00pm until 5:00pm with Fr. Jerome Leake saying closing prayers at 4:45pm. Interment will be private. For further information and to leave online condolences for Judy’s family, please visit our website at www.daleidenmortuary.com. Memorial contributions may be made in Judy's memory to The Elephant Sanctuary in Tennessee, where Judy adopted an elephant named Millie. She loved what they do there to save elephants, so she would appreciate donations to be directed there. The address is 27 E. Main St., Hohenwald, TN 38462 931-796-6500

The family of Judith Ann "Judy" Morrison created this Life Tributes page to make it easy to share your memories.

Send flowers to the Morrison family.