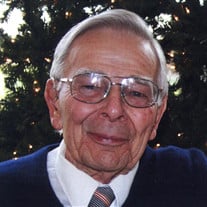 Joseph Anthony Rippinger, 97, of Aurora, entered eternal life surrounded by his children and grandchildren Wednesday, May 8, 2019 at Presence Fox Knoll. He was born March 16, 1922 in North Aurora, Illinois, the son of Joseph and Josephine (Schirtz) Rippinger. He graduated from Marmion Military Academy in 1940, attended St. Procopius College from 1940 to 1942 and graduated from North Central College in 1947. He enlisted in the Army Air Corps in February, 1943. In 1944 he and his Liberator B-24 bombing crew went to occupied China, where over the next year they flew fifty eight bombing missions. Among his World War II honors were the Chinese Air Medal and the Distinguished Flying Cross. Upon his return from China after the war, Joseph married Lt. Helen Wilhelm, an Army Air Corps nurse. The wedding took place on January 2, 1946, in the chapel at March Field, in Riverside, California. Joseph and Helen returned to Aurora to raise their family of five sons and one daughter. Joe worked for Sears Roebuck for thirty eight years, retiring in 1983. He was a very active member of Annunciation Church, a Third and Fourth Degree member of the Knights of Columbus, past president of the Aurora Serra Club, a member of the Fox Valley and Marywood Garden Clubs, the Phoenix, Turner, Aurora Moose Clubs, and the Aurora American Legion Post 84. He was a lifetime member of the Abbot Marmion Society of Marmion Abbey, the Veritas Society of Rosary High School, and the Einsiedeln Society of St. Meinrad Archabbey, as well as a lay oblate of Marmion Abbey. He was a member of the China, India, and Burma Hump Pilots Association. Joe served as a volunteer for many years in the surgical waiting area and Meals on Wheels of Provena Mercy Hospital. Joe and Helen were among the first overnight volunteers for the PADS ministry at Hessed House in Aurora. He was also a Eucharistic Minister for Provena Mercy Hospital and for the homebound at Annunciation Church. Joe’s passions in life were his wife, children, and grandchildren. He was an avid gardener and for many years planted and lovingly tended the Marian grotto of Annunciation Church. He is survived by his four sons, John (Susan) Rippinger, Fr. Joel Rippinger, O.S.B., Daniel (Adrianne) Rippinger, Tim (Georgette) Rippinger; his daughter, Mary Jo (Michael) DiRe; a daughter-in-law, Janet Rippinger; twelve grandchildren; six great grandchildren; a brother, Phil (Janice) Rippinger; a brother-in-law, John Galles; many nieces and nephews. He is preceded in death by his wife, Helen Margaret Rippinger; his parents; his son, Lt. Thomas Rippinger; three brothers, John Rippinger, Francis Rippinger and James (late Alice) Rippinger, David (late Rena) Rippinger; a sister, Emilie Galles. Visitation will be held Monday, May 13, 2019 from 4:00 PM until 8:00 PM, with a Liturgical Wake Service at 7:00 PM, at THE DALEIDEN MORTUARY, 220 North Lake Street, Aurora, Illinois 60506. (630) 631-5500 An additional viewing will be held Tuesday, May 14, 2019 from 9:30 AM until the funeral Mass hour at 10:30 AM at Marmion Abbey Church 850 Butterfield Rd, Aurora, IL 60502. His son Fr. Joel Rippinger will officiate with interment at Marmion Abbey Cemetery. Please visit our interactive website at www.daleidenmortuary.com where you may sign the guest book or leave condolences for Joseph’s family. In lieu of flowers memorial contributions may be made to the Joe and Helen Rippinger Garden Fund at Marmion Abbey, 850 Butterfield Road, Aurora, Illinois 60502.www.marmion.org/gardenfund

Joseph Anthony Rippinger, 97, of Aurora, entered eternal life surrounded by his children and grandchildren Wednesday, May 8, 2019 at Presence Fox Knoll. He was born March 16, 1922 in North Aurora, Illinois, the son of Joseph and Josephine (Schirtz)... View Obituary & Service Information

The family of Joseph Anthony Rippinger created this Life Tributes page to make it easy to share your memories.

Send flowers to the Rippinger family.