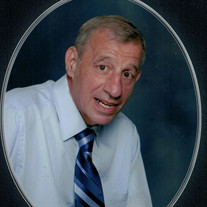 Joseph Eugene Clark of Plainfield, Illinois, peacefully passed away at his home with his wife by his side on October 19, 2019. He was born February 15, 1948 in Aurora, Illinois. Joseph was a graduate of West Aurora High School. He served in the U.S. Army during the Vietnam War from 1969-1973. After his return from service, he began his career in the heating and air conditioning field. He was a service tech for Chicago Trane for over 38 years. He retired in 2010. Joseph was a recent member of St. Anne Catholic Church in Oswego. He enjoyed bowling, week end get aways, helping his family and friends with their many projects and spending time with his grandchildren. Some of his happiest times were those playing with the grandchildren. Joseph is survived by his wife Elaine, his son Steven Clark, his daughter Holly (Marlon) Dacres and her children Alexis and Alexander, his stepson Michael (Stephanie) Garbe and his children Alison, Olivia, Jacob and Carter. Joseph is also survived by his brother Lonnie (Deb) Clark, Jr., his sister Kimberly Clark and his brother-in-law Donald (Lynda) Reier. He is also survived by several nieces, nephews, grand-nieces and grand-nephews. Joseph was preceded in death by his parents Rita (Belchner) and Lonnie Clark, Sr., his brother Dennis Clark and his sister Nanci Newman. Funeral from THE DALEIDEN MORTUARY will be Thursday, October 24, 2019 at 9:15am to St. Anne Catholic Church in Oswego at 10:00am. Fr. William Dewan will preside with interment at Risen Lord Cemetery in Oswego. Visitation will be held Wednesday, October 23, 2019 from 3:00pm until 8:00pm at THE DALEIDEN MORTUARY, 220 N. Lake St., Aurora, 630-631-5500. Please visit our interactive website where you may leave condolences for Joseph’s family. In lieu of flowers, donations may be made in Joseph’s memory to the American Cancer Society. The family would like to extend their gratitude and appreciation to Seasons Hospice and Palliative Care for their warm and compassionate care given to Joseph. Words cannot express how grateful we are for all they have given us.

Joseph Eugene Clark of Plainfield, Illinois, peacefully passed away at his home with his wife by his side on October 19, 2019. He was born February 15, 1948 in Aurora, Illinois. Joseph was a graduate of West Aurora High School. He served in... View Obituary & Service Information

The family of Joseph E. Clark created this Life Tributes page to make it easy to share your memories.

Send flowers to the Clark family.