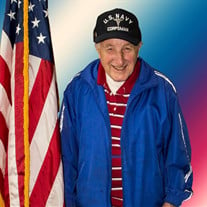 John P. Galles, 94, of Aurora, passed away Wednesday, August 14, 2019 at Alden Gardens of Waterford. He was born April 5, 1925 in Aurora, IL. John was a dedicated and devoted man who took great pride in his family and city too. He was strong willed, yet humble, who was generous to a fault. He set high standards for himself in morals and dignity as well as in others. He always found pleasure in helping friends, family, or a stranger in need. Faith was his strength. John served in the U.S. Navy for three years, mainly in the Guam Medical Corp. He was discharged in 1946 as Pharmacist 2nd Class. John graduated from East Aurora High School in 1942 and he married Emilie Rippinger on November 27, 1947. (Written by Emilie) John was a longtime business owner of Johno’s Main Surplus for many years in downtown Aurora. He was heavily involved in scouting and Aurora Boys baseball and football leagues. He was a member of the City of Aurora Board. He served as Grand Marshall in the 4th of July Parade. The Solfisberg field was named John Galles Sports Complex in his honor. He is survived by 5 children David (Jane), Michael (Cindy), John (Susan), Terry (Margi), and Josie (Bruce) Dow; 13 grandchildren; and 10 great grandchildren. He was preceded in death by his wife Emilie Galles; his parents Anna (Perisot) and John P. Galles; his granddaughter Rachel Conley; and three sisters Catherine (Stan) Thryselius, Mary (Joe) Yanko, and Betty (Jon) Schmeisser. Funeral from THE DALEIDEN MORTUARY will be Monday, August 19, 2019 at 9:30am to Annunciation Church at 10:00am. Fr. Joel Rippinger, OSB will officiate with interment at Marywood Cemetery. Visitation will be held Sunday, August 18, 2019 from 3:00pm unitl 7:00pm with a liturgical wake service at 4:00pm at THE DALEIDEN MORTUARY, 220 N. Lake St., Aurora, 630-631-5500. Please visit our interactive website at www.daleidenmortuary.com where you may leave condolences for John’s family.

John P. Galles, 94, of Aurora, passed away Wednesday, August 14, 2019 at Alden Gardens of Waterford. He was born April 5, 1925 in Aurora, IL. John was a dedicated and devoted man who took great pride in his family and city too. He was strong... View Obituary & Service Information

The family of John P. Galles created this Life Tributes page to make it easy to share your memories.

Send flowers to the Galles family.