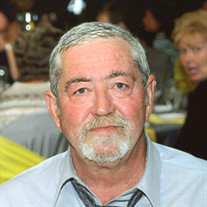 John H. Erath, 68, of Eola, IL, passed away Monday, June 24, 2019 at his home. He was born May 17, 1951 in Aurora, IL. John was a Veteran of the U.S. Air Force and a member of Am Vets. For many years he served the youth of Aurora as a Cub Scout Leader. He was employed at the Henry Pratt Company for over eighteen years until he started his own business. In retirement John enjoyed hunting and fishing as well as building bird houses. He was a member of The American Society for the Prevention of Cruelty to Animals (ASPCA). He is survived by wife of forty one years, Sharon (Wright) Erath; two sons, Jeremy (Julie) Erath, Jason Erath; his special “daughter”, Jennifer Olson; four grandchildren, Christopher (Nikki) Erath, Kaylee Erath, Aiden Erath, Kayla Marie Erath; two great granddaughters, Ella and Ava Erath; his first great grandson due to be born in July; a nephew, Tim (Lynn) Erath; a niece, Laurie (Ken) Pferschy; and his dog, Barkley. He is preceded in death by his parents; Harry and Margaret (Spang) Erath; his brother, Tom (late Rosie) Erath. John’s family wishes to thank the staff of Rush Copley Cancer Center, Dr. Bob Manam and PA. Erin Stillwell for the loving care John received. Visitation will be held Thursday, June 27, 2019 from 2:00 PM until 8:00 PM, with a Liturgical Wake Service at 3:00 PM, at THE DALEIDEN MORTUARY, 220 North Lake Street, Aurora, Illinois 60506. (630) 631-5500 Funeral services will be held Friday, June 28, 2019 at 10:00 AM at THE DALEIDEN MORTUARY; Fr. Don McLaughlin will officiate with interment at St. Joseph Cemetery. Please visit our interactive website at www.daleidenmortuary.com where you may sign the guest book or leave condolences for John’s family. In lieu of flowers memorial contributions may be made to the Erath Family or The American Society for the Prevention of Cruelty to Animals.

The family of John H. Erath created this Life Tributes page to make it easy to share your memories.

Send flowers to the Erath family.