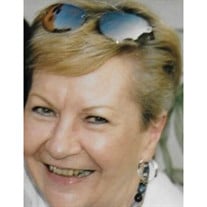 Everyone fortunate enough to have known Joan Ferrelli could not help but celebrate her and made her their friend for life. Her kind, gentle spirit, loving personality, and quick wit attracted many to her. Mrs. Ferrelli, 90, of Aurora, passed away peacefully on October 6th, 2020 after a long battle with dementia. Born July 17, 1930 in Chicago to the late Albert and Josephine Novak, Joan was raised with her brother Donald in a loving, caring home. After graduating from Roosevelt High school, she worked part time for Illinois Bell and the YMCA. Joan fell in love with dancing at a young age and regularly attended dances at a variety of venues. At one particular event, an ROTC dance in 1951, a handsome, young soldier introduced himself and asked her to dance. The decision to make room for Anthony ("Tony") on her dance card resulted in a 64-year marriage and four sons. They shared an intense, deep love; devotion to God, the Catholic faith, and an unending commitment to family. With Anthony's chosen profession in the armed forces, they made their lives together in various cities both stateside and overseas, eventually making Aurora IL their home. Always putting her husband and children first, Joan bypassed what others considered "more traditional employment" working many more hours for her family than any "job" would require. From the time Anthony's family met her, they were captivated by her engaging personality and soft-spoken demeanor. Considering that Tony's parents were first generation Italian immigrants, they were also surely impressed with her skill at cooking dishes like spaghetti and meatballs, lasagna and manicotti. She and Tony made their home on Aurora's West side, Joan worked hard keeping an absolutely immaculate home. Joan's cooking skills became legendary, especially for a woman who claimed she couldn't boil water until she met Tony. Joan along with Tony, spent several years volunteering at Mercy Center Hospital in the 1980's. She frequently came home with sore sides and running makeup caused by the shenanigans in which she engaged with her partner-in-crime, Marilyn Buss. Several other women in the neighborhood including Rita, Shirley, Celia, Margaret and others, became more like sisters. They shared cooking secrets, cried on each other's shoulders when needed, but laughed more often; and sipped a cocktail--- or two. She joins in paradise her parents and brother; husband Anthony and oldest son Michael, and Chris' wife Denise. Joan is survived by sons Christopher, Mark (Wendy), and Daniel; grandchildren, Matthew, Megan (Colin), Anthony, Celia and Mark; and great grandchildren, Lana, Logan Giovanni and Milani. The memorial mass will be held Monday October 12th at 11:00 a.m. with Father Charles Reichenbacher officiating at Holy Angels Church, 180 South Russell Avenue, Aurora. The family would be remiss if they did not mention their eternal appreciation for the care, love and support of Ewa and her sister Leeza, Joan's live-in caregivers over the past several years. The family would also like to thank Joan's Eucharistic Minister Steve Gustavson and Jen & Tricia Roberts for their support during the past 4 years. Each one's patience and compassion made Joan's journey more comfortable. In lieu of flowers, please send donations to either Marmion Military Academy or Holy Angels Parish. "Celebrate the people in your life who are there because they love you for no other reason than because you are YOU." ? Mandy Hale

Everyone fortunate enough to have known Joan Ferrelli could not help but celebrate her and made her their friend for life. Her kind, gentle spirit, loving personality, and quick wit attracted many to her. Mrs. Ferrelli, 90, of Aurora, passed... View Obituary & Service Information

The family of Joan Ferrelli created this Life Tributes page to make it easy to share your memories.

Everyone fortunate enough to have known Joan Ferrelli could not...

Send flowers to the Ferrelli family.