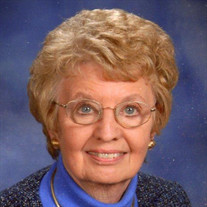 Helen Jean Collins (nee Meyer) died peacefully on April 29th, 2020 in Aurora, Illinois at the age of 88. Helen was born on July 17 th , 1931 in Joliet, Illinois to George and Helen Meyer. She graduated from Madonna High School. She married Robert Collins Sr, her high school sweetheart. They spent the next 56 years together until his passing in 2008. Helen and Robert started their family in Aurora Illinois and eventually moved to Mattoon Illinois to open and operate their own McDonald’s franchise. Helen is survived by her children, Patrick Collins, Brian Collins, Kathleen (Jim) Nass III, John (Eva) Collins and daughter in law Mary Jane (Escobar) Collins. She was a proud Nana to Sean (Katie) Collins, Michael Collins, Courtney (Andy) Wright, James (fiancé Lucy) Nass IV, Spencer (Jennifer) Nass, Matthew (Katie) Nass, Keilani Collins, Ivy Collins and 5 great grandchildren. She is also survived by brother in law Dean Hamingson as well as many loving nieces and nephews She is preceded in death by her parents George and Helen Meyer, husband Robert Collins Sr, son Robert Collins Jr, granddaughter Holly Collins, her brother, John Meyer and sister, Patti Hamingson. Helen & Bob loved to travel the world upon their retirement. She was proud of her time on the local board with Ronald McDonald House Charities. She was also an active and dedicated member of the Immaculate Conception Church in Mattoon and often volunteered to be a Eucharistic Minister. She was also well known for the outstanding cupcakes she would make for every occasion. Due to the current restrictions, Helen’s funeral Mass will be private at Holy Angels Church on Monday, May 4th, 2020. Her burial will also be private at Mt Olivet Catholic Cemetery. Arrangements are being handled by THE DALEIDEN MORTUARY, 220 N. Lake St., Aurora, 630-631-5500. Please visit our website at www.daleidenmortuary.com where you may leave condolences for Helen’s family. Memorial contributions may be made in Helen’s memory to Ronald McDonald House Charities RMHC) www.rmhc.org, Holy Angels Catholic Church “Capital Campaign” 180 S. Russell Ave. Aurora, IL 60506 www.holy-angels.org and Immaculate Conception Church, 320 N. 21ST Street - Mattoon, IL 61938 www.mattoonimmaculateconception.org A celebration of life will be held later when conditions permit. The family would like to thank the caregivers/staff at Bickford of Aurora and Angels Grace Hospice for their care and compassion.

The family of Helen J. Collins created this Life Tributes page to make it easy to share your memories.

Send flowers to the Collins family.