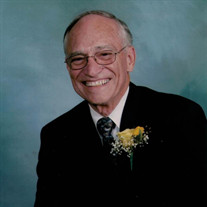 George Hatcher died peacefully on June 22, 2020, at Holmstad Covenant Care in Batavia. He was born on April 12, 1933, in Auburn, IL. In 1941, his family moved to a farm near Plano. He and his three brothers and three sisters all attended a one-room schoolhouse located on the farm property. In 1951, George graduated from Plano High School and enlisted in the US Naval Reserve. He was a Korean War Veteran, having served two years as an electrician on the USS Duxbury Bay Middle East Force Flag Ship. After his discharge from the Navy, he worked for Western Electric, which later became AT&T. On October 13, 1956, he married Carol Bombard. They were married for more than 60 years. George continued his education at Waubonsee Community College and graduated with his Associate’s degree in 1977. He retired from AT&T in 1986, and began his own electrical contracting business until retiring again at 80 years old. He loved spending summers in Eagle River, WI, with family and friends. He was an avid outdoorsman, hunter and fisherman. His heart was as big as his smile. He loved meeting new people, and no one was ever a stranger. He made many friends at Holmstad Covenant Care in Batavia, and everyone loved him. He is survived by his daughter, Shelly Windett (Tom Sherwin); his son, Kevin (Denise); his son-in-law, John Ledermann; his grandchildren Nick (Kat), Tracy (Randy), Ashley, Jonelle (Tim), Carly, Austin, Angela, Alisyn and Amber; his great-grandchildren Mason, Carter, Coby, Pippa, Jonah and Calvin. He is also survived by his three sisters, one brother and many nieces and nephews. He was preceded in death by his parents and in-laws; his wife, Carol; two of his brothers; and his daughter Julie. Funeral from THE DALEIDEN MORTUARY will be Saturday, June 27, 2020 at 10:00am to Holy Angels Church at 10:30am. Fr. Michael Lavan will officiate with interment at Mt. Olivet Cemetery. Visitation will be held Saturday morning from 8:30am until 10:00am at The Daleiden Mortuary, 220 N. Lake St., Aurora, 630-631-5500. Please visit our website at www.daleidenmortuary.com where you may leave condolences for George’s family. Due to current restrictions, please wear a mask and social distance at all locations. In lieu of flowers, please consider a donation in George’s name to the Holy Angels Food Pantry Fund.

George Hatcher died peacefully on June 22, 2020, at Holmstad Covenant Care in Batavia. He was born on April 12, 1933, in Auburn, IL. In 1941, his family moved to a farm near Plano. He and his three brothers and three sisters all attended a... View Obituary & Service Information

The family of George A. Hatcher created this Life Tributes page to make it easy to share your memories.

Send flowers to the Hatcher family.