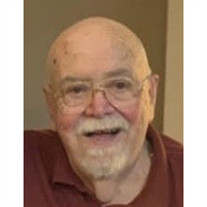 Frank Louis Nemechek, age 84, of Batavia, passed away October 7, 2020 at his home surrounded by his loving family. Frank was born on April 17, 1936, in Elmhurst, IL to his loving parents, Frank F. and Valera (Lovasik) Nemechek. Frank spent most of his youth in Aurora, as well as his young adult years. He graduated from Marmion Military Academy (1954) and Michigan State University (1958). Frank married the love of his life, Joni Blessington in 1962 and they raised two children, Michelle Seiton and Frank J Nemechek. They were blessed with six grandchildren, Daniel and Nicole Seiton, and Frank Zachary, William, Grace and Molly Nemechek. His interests were many. He was very proud of attaining the rank of Eagle Scout with palms while in Boy Scouts. Later he developed a strong interest in hunting and fishing. He also had a love/hate relationship with golf, though it was a frustration to him his entire life. Equally frustrating was his life-long hope for the Chicago Cubs whose 2016 World Championship brought him great joy. He was a member of the Knights of Columbus. St. Charles Country Club, and Kelly Greens Golf and Country Club. Frank took great pride in the family's Vizsla dogs, Tiffy, Taffy and Copper. He also had a strong interest in classic cars and owned and enjoyed his 1930 Model A Ford and 1941 Cadillac. Frank and Joni owned a home in Florida where they spent the winters and enjoyed visits from family and friends. After graduating from college and completing his military service as an armored officer, he went to work for Sears. He held various executive positions in the stores and in headquarters. After his retirement from Sears, he started his own manufacturing representative business which he named NEMOCO. Frank is survived by his two children, Michelle (Brian) Seiton of Batavia and Frank J Nemechek of Batavia; six grandchildren, Daniel and Nicole Seiton, and Frank Zachary, William, Grace and Molly Nemechek. He is preceded in death by his loving wife of 47 years, Joni, who passed away in 2009, his parents, sister Ilene Spitz, brothers-in-law Jim Spitz, Merle and Robert Blessington, Louis Costible, sister-in-law Peggy Costible and nephew Ron Spitz. Visitation will be held Sunday, October 11 from 1:00-4:00pm at THE DALEIDEN MORTUARY, 220 N. Lake St., Aurora. In adherence to Covid-19 pandemic protocols, non-family visitors are asked to pay their respects to the family for only a few minutes and exit the funeral home in a timely fashion. Social distancing and face masks are required for those in attendance. Funeral services will begin at 9:45am, Monday, October 12, 2020 with prayers at THE DALEIDEN MORTUARY before proceeding to Holy Cross Catholic Church, 2300 W Main St. in Batavia, to celebrate Mass at 10:30am. Due to current renovations in church, the funeral mass will be celebrated in Donavan Hall, in the lower level of the church. Attendees will be limited to seventy (70) in church and all are asked to wear face masks and practice social distancing. Interment will follow at Resurrection Cemetery. In lieu of flowers, memorial donations can be made to Holy Cross Church, 2300 Main Street, Batavia, IL 60510; Living Well Cancer Resource Center, 442 Williamsburg Avenue, Geneva, IL 60134; or the American Cancer Society, 143 First Street, Batavia, IL 60510. Please remember to sign the virtual guestbook and to leave condolences for Frank's family.

The family of Frank L. Nemechek created this Life Tributes page to make it easy to share your memories.

Send flowers to the Nemechek family.