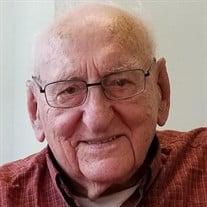 Emery “Jeep” Kalman, 97, a lifetime resident of Aurora who was living at Jennings Terrace Assisted Living Retirement Home, passed away on August 8, 2021. He was born October 10, 1923 in Aurora to Frank and Rose Kalman. He went to school at Oak Park Elementary, St Therese School, and East Aurora High School where he played football. He proudly served his country in the US Army Unit 599th Signal Aircraft Warning Battalion during World War II. After working 40 years he retired from Lyon Metal. He was on the Board at St. Nicholas Catholic Church and a regular usher. He enjoyed scouting: Cub Scout Master, Pack 328 at St. Nicholas, Round Table Commissioner for Devil’s Cave at Camp Ka-De-Ka, Commissioner at Camp Chin-Be-Gota for Boy Scout Troop 28. He loved to dance the polka and jitterbug at the VFW Club and Tiger Club. He had fun throwing horseshoes, winning many trophies. He enjoyed fishing and went regularly with his good friend Chuck and also with Nancy at her pond. He rode his bicycle to go fishing until age 90, even retrofitting it with an electric motor to help with the hills. He spent time on the computer sending emails to friends and family well into his 80’s. He played cards, dice, billiards, and was a bingo caller. He particularly enjoyed inventing new card and dice games with intricate rules and teaching them to others. After he retired, he rekindled his love of art and created ‘recycled art’ which was featured in a Beacon News article. Emery was known for his quick wit and sense of humor, he loved a good joke and making people smile. He enjoyed family gatherings and looked forward to playing games and telling stories to his grandkids and great grandkids. While quick with a joke, he was also full of wisdom, regularly encouraging his grandchildren to “get smart” in order to get a “good job”. Despite his age, he never grew old!!! He is survived by his loving wife of 74 years, Antonette Kalman (Zefran) and 3 children. Carol (Larry) Looper of Bloomington, Joan (Rex) Roehl of Deerfield, Jim (Virginia) Kalman of Aurora. In addition he leaves behind his very loved nine grandchildren and eight great-grandchildren. He is predeceased by his son David Kalman, sisters Barb (John) Hoffer, Julia (Joe) Bokar, two brothers Frank Kalman and Stephen Kalman, and one grandson. The family would like to thank the staff at Jennings Terrace Assisted Living for their exceptional care and compassion. A memorial Mass will be held at 11:00 AM, Friday August 13, 2021 at Blessed Sacrament Church, 801 Oak Street, North Aurora with Father Max Lasrado officiating. Visitation will be held from 10:00 AM – 11:00 AM at the church preceding Mass. Following the service, a family burial will be held at St Joseph’s cemetery. IN LIEU OF FLOWERS, donations can be made 'in memory of Emery Kalman' to Jennings Terrace which is a non profit retirement home. The donations will be used for resident activities that Emery always participated in and enjoyed so much. Checks can be sent to Jennings Terrace Assisted Living, 275 S. LaSalle St, Aurora, IL 60505

Emery &#8220;Jeep&#8221; Kalman, 97, a lifetime resident of Aurora who was living at Jennings Terrace Assisted Living Retirement Home, passed away on August 8, 2021. He was born October 10, 1923 in Aurora to Frank and Rose Kalman. He went to... View Obituary & Service Information

The family of Emery D. Kalman created this Life Tributes page to make it easy to share your memories.

Emery “Jeep” Kalman, 97, a lifetime resident of Aurora who was...

Send flowers to the Kalman family.