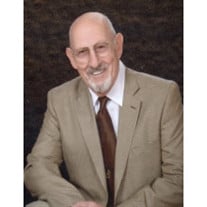 Elmer J. Weber, 87, passed away on Wednesday, August 19, 2020. He was born on November 23, 1932 in Aurora, IL to Rose (nee Michels) and Theodore A. Weber. Elmer attended St. Nicholas School and East Aurora High School. Elmer began his working career in his early teens by working at the Wennmacher Farm in Naperville, IL, moving to Richard-Wilcox in Aurora, IL and then becoming an apprentice to Bernie Heitkotter to learn the plaster drywall trade. Elmer decided to start his own business and opened Weber Plastering & Drywall. Elmer felt a strong need to serve his community so he decided to join the Aurora Police Department in 1967. During his twenty six year tenure on the police force, Elmer rose to the rank of Lieutenant and was trained by the Federal Bureau of Investigations in negotiating and hostage situations. He was a member of the Aurora Policeman's Honor Guard, the APD SWAT team and earned many awards and honors for his dedication and service. Elmer retired from the police department in July 1993 but began another career as a member of the Kane County Merit Commission where he interviewed, tested and hired new recruits for the Kane County Sheriff's office. Elmer held this position until May 2019. Elmer played football for the Aurora Clippers when they won the 1952 Bi-State Football League. During his downtime, he enjoyed many years of bowling in leagues at St. Nicholas, Parkside Lanes and Funway. Elmer picked up golf and spent time mastering his swing. Elmer's greatest loves were his family, his faith and helping others. He was a devoted and active member of St. Peter Church in Aurora, serving as a member of the finance committee, server, fundraiser and general handyman. He helped organize St. Peter School and Church golf outings. Famous for his pork chop dinners he was the head cook for the annual Rockford Diocese Clergy Night and St. Peter annual pork chop dinner fundraisers. Elmer helped feed many people at Hesed House. Elmer is survived by the love of his life, Lee (nee Bailey) Weber, of Naperville, IL to whom he was united in marriage on November 27, 1954; seven children, Kathy (George) Baird, Norb Weber, Cindy (Tom) Nickels, Agnes (Ken) Shannon, Jane (Don) Tansor, Joe (Gina Waldvogel) Weber, Paula (Mitch) Canty; twenty one grandchildren; twenty three great grandchildren; two brothers, Ted (Shirley) Weber, Don (Maryann) Weber; many nieces, nephews and godchildren including his goddaughter, Connie Weber.. He was preceded in death by his parents, his infant great grandson, Brandon Vargas; two brothers, Nicholas Weber, Fr. Norbert Weber; four sisters, Corrine Murtaugh, Alice Abens, Kathleen Weber, Sr. Rose Marie Weber, O.S.F.; and his daughter-in-law, Sarah (nee Clementz) Weber. Elmer was a loving husband, father, grandfather, great grandfather, brother, uncle, godfather and friend. He will be greatly missed by all. Visitation will be on Saturday, August 22, 2020 from 12:00 PM until 3:00 PM at THE DALEIDEN MORTUARY, 220 North Lake Street, Aurora, Illinois 60506. (630) 631-5500. Due to Covid-19 pandemic protocols, non-family visitors are asked to pay their respects to the family for only a few minutes and exit the funeral home in a timely fashion. Social distancing and face masks are required for those in attendance. In State viewing will be held Monday, August 24, 2020 from 9:00 AM until 10:00 AM at St. Peter Church, 925 Sard Avenue, Aurora, Illinois 60506. Mass of Christian Burial will be offered Monday, August 24, 2020 at 10:00 AM at St. Peter Church; Fr. Joachim Tyrtania will officiate with interment at St. Joseph Cemetery. Please visit our interactive website at www.daleidenmortuary.com where you may sign the guest book or leave condolences for Elmer's family. In lieu of flowers memorial contributions in Elmer's name may be made to St. Peter Church, 925 Sard Avenue, Aurora, Illinois 60506.

The family of Elmer J. Weber created this Life Tributes page to make it easy to share your memories.

Send flowers to the Weber family.