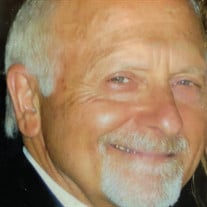 Edward John Olah was born on September 29, 1933 in Aurora, IL to Louis and Mary Olah. He was the second to youngest of five boys: Louis Jr, Albert, Vic and Denny. Ed went to East Aurora High School and later served dutifully in the United States Navy during the Korean war. After the war, he met and married the love of his life, Janice Mae Olah, on February 1, 1957. They were an inseparable pair and were happily married for sixty-three years, having four daughters, two grandsons, and three great grandchildren. Ed had a long and successful career with Farmers Insurance and in his retirement, he worked part time at Randall Self Storage-selling storage units and often seen cruising around on the golf cart chatting with customers. He was a true competitor and was very physically active right up until the end. He was an avid golfer and took pride in being able to sink long difficult putts from the rough, “while other guys took two or three chip shots”. He was a lifelong runner, participating in 5k and 10k events around Illinois and he was very proud to say that he had completed the Chicago Marathon. Ed was a ferocious and nationally-ranked racquetball player, winning the Illinois state championship in the late 90’s. He was notorious for easily beating guys half his age on the racquetball court at the YMCA and was known for his signature “pinch shot”. Over the years Ed thoroughly enjoyed poker nights with the Popp boys and their friends. After a long battle with Parkinson’s disease, Ed peacefully went to be with Jesus on December 22nd, with his daughter Candace holding his hand and his wife Jan at his side. Ed is survived by his wife Jan, daughters Candace Popp, Robin Napolitano, Pam Olah, and Merry Beth Olah, son-in-law Lloyd Popp, grandsons Max Popp (Loryn Popp), and Ben Popp (Yesenia Popp), and great-grandchildren Brodie Popp and Mabel Popp, and Zayne Popp. Above all else, Ed was a loving father and a hands-on grandfather and great grandfather, affectionately known as “Papa Ed”. You could always count on him to be supporting his grandsons and cheering them on at every single sporting event, school event, music recital, and gig throughout the years. Ed’s grandsons Max and Ben look forward to one day sharing with their children what fun times and traditions they had with “Papa Ed.” He will be dearly missed and never forgotten. Memorial Services will be held at a later date.

Edward John Olah was born on September 29, 1933 in Aurora, IL to Louis and Mary Olah. He was the second to youngest of five boys: Louis Jr, Albert, Vic and Denny. Ed went to East Aurora High School and later served dutifully in the United States... View Obituary & Service Information

The family of Edward John Olah created this Life Tributes page to make it easy to share your memories.

Send flowers to the Olah family.