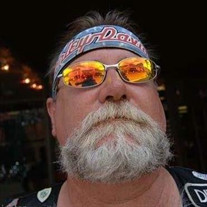 Donald R. Pugh (Don), 63, of Aurora, passed away on January 13, 2019 in Aurora, Illinois. Don was born in Melrose Park to Marilyn and Clarence Pugh on November 4, 1955. He attended Proviso West High School in Hillside, Illinois. Don was a loving Husband and Father and an exceptional Papa and Great Papa. He was a proud Navy Veteran and later spent many years as a Warehouse Operations Manager in the Aurora area and took great pride in his work. He was passionate about his motorcycle and lived for long rides and the open road. Don was a diehard Chicago Bears, Blackhawks and Cubs fan who did not miss a game. He absolutely adored his dogs Bella and Rufus. Don was a loyal friend to many and tried to use his experiences in life to help others in need. He would want to extend a thank you to Bill W. for helping him along the way. Don is preceded in death by his parents Marilyn and Clarence Pugh, Great Grandson Zion and fur baby Bella. He is survived by his wife Joan; Sons, Larry (Cindy), Frank (Lori), and Kevin (Jessica); daughters, Nicole (Ryan), and Danielle (Clarence); Grandchildren Kyrsten (Tim), Alex, Dylan, Kevin Jr., Joey, Brian, Tyler, Gianna, Connor, Clarence, Cheyenne and Elyse and Great Grandson Jayce; Sisters Cindy Stringham (John) and Edith Kmecheck; fur baby Rufus; loving extended family including nephews, a niece, aunts, uncles and cousins as well as many treasured friends. A memorial visitation will be held from 3:00-7:00pm on Friday, January 25, 2019 at The Daleiden Mortuary 220 N Lake St. Aurora, Illinois 60506. In lieu of flowers, donations in Don’s name to Midwest Shelter for Homeless Veterans, inc., 433 S. Carlton Ave, Wheaton, Il 60187 would be greatly appreciated.

Donald R. Pugh (Don), 63, of Aurora, passed away on January 13, 2019 in Aurora, Illinois. Don was born in Melrose Park to Marilyn and Clarence Pugh on November 4, 1955. He attended Proviso West High School in Hillside, Illinois. Don was a... View Obituary & Service Information

The family of Donald R. Pugh created this Life Tributes page to make it easy to share your memories.

Send flowers to the Pugh family.