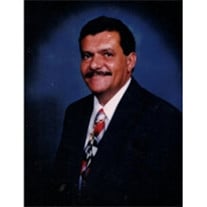 David Arroyo Torres passed away on Thursday, February 25, 2021 at his home surrounded by his family and friends at the age of 70. He was born in Lares, Puerto Rico, to Domingo Arroyo Mendez and Obdulia Torres Perez. He arrived in Aurora in 1966 when his parents moved the family here to join other relatives. Survivors include his former wife and mother to his children Rosa Burciaga de Arroyo; his four sons Alex Arroyo (Chad), David Arroyo, Jr., Richard Arroyo (Anne), and Orlando Arroyo (Melissa); three grandchildren Joseph, Peter, and Madeleine Arroyo; three sisters Ana Celia Arroyo Torres, Ines Arroyo Torres, and Elvira Arroyo Torres (Harry); two brothers Hiram Arroyo Torres (Cecilia) and Al Arroyo Torres; and Gail Dobran; his 24 nieces and nephews, especially Orlando Perez Arroyo, Alexander Rodriguez Arroyo, and A.J. Rodriguez Arroyo; and many others that were loved by him. He was preceded in death by his parents and grandparents; his sister Leocadia Arroyo Torres, and nephew Rene Rodriguez Arroyo. David worked at Lyon Metal Products. He founded three car dealerships: Broadway Auto Sales, Borimex Auto Sales, and retired from Olympic Motors in 1991. He was a member of St. Therese Church in Aurora, a founding member of The Aurora Hispanic Chamber of Commerce, and a former member of United Steelworkers of America (USWA). In his retirement David enjoyed spending time with his friends and family, cooking, gardening, playing "el cuatro", playing his guitar, musica jibara, raising chickens and his biggest love was Corvettes! Funeral services for David will begin at 9:30 AM on Tuesday, March 2, 2021 from THE DALEIDEN MORTUARY to St. Therese Church, 271 N. Farnsworth Avenue, Aurora, IL for a funeral mass at 10:00 with Fr. Luis Segura, M.S.C. officiating. Burial will follow at Mt. Olivet Cemetery in Aurora, IL Visitation will be on Monday, March 1, 2021 from 2:00 PM until 8:00 PM with a liturgical wake service at 5:00 PM at THE DALEIDEN MORTUARY, 220 N. Lake Street, Aurora, 630-631-5500. Due to Covid-19 pandemic protocols, non-family visitors are asked to pay their respects to the family for only a few minutes and exit the funeral home in a timely fashion. Social distancing and face masks are required for those in attendance.

David Arroyo Torres passed away on Thursday, February 25, 2021 at his home surrounded by his family and friends at the age of 70. He was born in Lares, Puerto Rico, to Domingo Arroyo Mendez and Obdulia Torres Perez. He arrived in Aurora in... View Obituary & Service Information

The family of David Arroyo Torres created this Life Tributes page to make it easy to share your memories.

Send flowers to the Torres family.