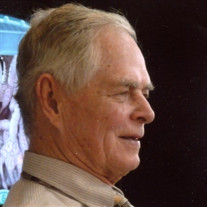 Daniel C. Deufel, 83, of Aurora, Illinois, passed away Friday, December 6, 2019 at his home. He was born January 1, 1936 in Chicago, Illinois. Dan grew up in the Beverly neighborhood of Chicago. He attended Morgan Park High School where he competed on the swim team and was the 1951 CPS Backstroke Champion. It was there that he met his wife of 30 years, Diana Gillott. Dan attended Purdue University and was a member of Phi Kappa Sigma Fraternity. He graduated in 1958 and joined, along with his brother, Tom, his father’s company Superior Motor Sales until 1968. Purdue was always close to Dan’s heart. He was a lifelong season ticket holder of both football and basketball; a distinguished member of the John Purdue Club and a benefactor of the Purdue Musical Organizations, the Aurora Foundation and the Paramount Arts Center of Aurora. Dan was a member of the Beverly Country Club and the Aurora Country Club. After obtaining his private pilot certificate in high school, he remained an avid aviation enthusiast and a member of various aviation organizations. In 1970, Dan and his family moved to Aurora, Illinois and at the age of 35, he purchased the local Anheuser-Busch Distributor. He was the President of Superior Beverage Co. from 1970 until 2001. After retiring, Dan enjoyed the privacy and peacefulness of nature on the banks of the Fox River in the cabin he built himself. A special thanks to all the individuals, especially, Barb and Jean, who were at his side personally and professionally through his years. He is survived by four children Carl (Colette) Deufel, Curt (Kristy Lancaster) Deufel, Donna Deufel, and Samantha (Richard) Adams; 12 grandchilden Daniel, Michael, Anna, Madeline, Jessie, Trenton, Logan, Hayden, Benton, Claire, Mark, and Eric; and several nieces and nephews. He was preceded in death by his granddaughter Linda Morgan Hill; his father Carl Deufel and his mother Adelaide Smith; his brother Thomas Deufel and his sister Dorothy Pearse. Funeral services will be held Thursday, December 12, 2019 at 12:00pm at THE DALEIDEN MORTUARY. Fr. Charles Reichenbacher, OSB will officiate. Interment will take place at Chapel Hill Gardens in Oak Lawn, IL on Friday, December 13, 2019 at 10:00am. Visitation will be held on Wednesday, December 11, 2019 from 3:00pm until 7:30pm at THE DALEIDEN MORTUARY, 220 N. Lake St, Aurora, 630-631-5500. Please visit our website at www.daleidenmortuary.com where you may leave condolences for Dan’s family. In lieu of flowers, memorial contributions may be made in Dan’s memory to Wounded Warrior Project & Folds of Honor.

Daniel C. Deufel, 83, of Aurora, Illinois, passed away Friday, December 6, 2019 at his home. He was born January 1, 1936 in Chicago, Illinois. Dan grew up in the Beverly neighborhood of Chicago. He attended Morgan Park High School where he... View Obituary & Service Information

The family of Daniel C. Deufel created this Life Tributes page to make it easy to share your memories.

Send flowers to the Deufel family.