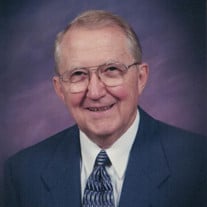 Cornelius J. “Nello” Avram passed away on Saturday, February 8, 2020. His kind and loving heart grew tired. He was born in Aurora, Illinois on March 16, 1928 to immigrant parents, who died when he was very young. Nello fell in love with Anna Marie Michels, the girl who lived directly across the street. They married in 1950 and were truly devoted to each other for just shy of 70 years. They raised four wonderful children. Family was everything to Nello, not only his immediate family but also his extended family. He was a skinny but scrappy kid. He often talked tough, but was really soft hearted. He was well- known on Pigeon Hill and in the Romanian community. He was a supporter of St. George Byzantine Catholic Church and St. Michael Romanian Byzantine Catholic Church. For several years, he served on the finance, funeral, and cemetery committees at St. Joseph Catholic Church where he and Anna Marie were longtime parishioners. He was also a member of the Phoenix Club. Nello graduated from East Aurora High School in 1947, Chicago School of Banking, and the University of Virginia School of Banking. He began his banking career at the Aurora National Bank as a coin wrapper and worked his way up to Vice President of Installment Loans, from which position he retired after 38 years at the bank. Nello and Anna Marie enjoyed traveling. They went to Europe and Hawaii several times. They enjoyed many trips to Las Vegas and the Florida Gulf Coast. Nello also loved to play golf. In his retirement, he helped establish the Brady Bunch, a group of his grade school friends who got together each month for breakfast. Nello is survivied by his loving wife, Anna Marie; his children, Michael (Mary Anne) Avram, Gary (Mary) Avram, Elizabeth (Robert) Simmons, and Susan Lidecka; several grandchildren and great grandchildren; sister-in-law Delores Avram; brother-in-law James Michels; and many nieces and nephews. He was preceded in death by his infant daughter, Mary Ann Avram; his parents, Elish and Flora (Dureski) Avram; four brothers Howard Avram, Victor (Anna Marie) Avram; LeRoy (Lola) Avram, and Louis Avram; three sisters Mary (Peter) Scurtu, Theresa (Ted) Gengler, and Florence (John) Erdie; and a son-in-law David Lidecka. Funeral from THE DALEIDEN MORTUARY will be Thursday, February 13, 2020 at 10:00am to St. Joseph Church at 10:30am. Fr. Matthew McMorrow will officiate with interment at St. Joseph Cemetery. Visitation will be held Wednesday, February 12, 2020 from 3:00pm until 8:00pm with a liturgical wake service at 3:00pm at THE DALEIDEN MORTUARY, 220 N. Lake St., Aurora, 630-631-5500. Please visit our interactive website at www.daleidenmortuary.com where you may leave condolences for Cornelius’ family. In lieu of flowers, memorial contributions may be made in Cornelius’ memory to St. Joseph Catholic Church, 722 High Street, Aurora, IL, St. Jude’s Children’s Hospital, 262 Danny Thomas Place, Memphis, TN 38105, or the charity of your choice.

Cornelius J. &#8220;Nello&#8221; Avram passed away on Saturday, February 8, 2020. His kind and loving heart grew tired. He was born in Aurora, Illinois on March 16, 1928 to immigrant parents, who died when he was very young. Nello fell in... View Obituary & Service Information

The family of Cornelius "Nello" Avram created this Life Tributes page to make it easy to share your memories.

Send flowers to the Avram family.