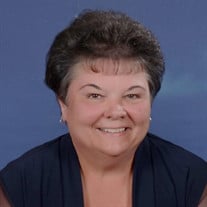 Cherilyn (Cheri) M. (Hames) Bohn, age 63, of Montgomery passed away on Tuesday, May 26th, 2020 with her family by her side. Cheri is survived by her husband, Terry Bohn; her oldest daughter, Tracey Bohn; her youngest daughter and son-in-law, Tiffany and Chris Witt; and nine sisters and two brothers and their families. She is preceded in death by her parents, Albert and Rita Anne Hames; and her brothers, Richard and Frederick Hames. Born on January 2nd, 1957, Cheri grew up in Aurora with her parents and thirteen bothers and sisters. After graduating from high school she began working at MetLife where she continued her career for the next 46 years. Cheri married Terry on June 6th, 1981 at St. Mary’s Church, and after remaining in Aurora for a few years, settled in Montgomery. On April 29th, 1982 and July 12th, 1985 respectively, she welcomed her two daughters. Cheri spent many warm summer days cheering on Terry, “T-Bone,” while he played fast pitch each season. Later she took her cheerleading to the bowling alley where both Tracey and Tiffany participated on their high school teams. She was their biggest fan in everything they did. Listening to live music and travelling were two of her favorite past-times with New Orleans being a favorite for both. Most recently, she was so happy to be able to take her last vacation to Alaska with family in August of 2019, shortly after beginning her third and final battle with cancer. She enjoyed her weekly Wednesday night bowling league, and cheering on her favorite sports teams, especially the Packers, White Sox, and Blackhawks. Cheri loved to go “Cha-chinging” and playing the slots. Cheri was a practicing Catholic, attending Sunday mass weekly at St. Anne’s of Oswego. She will be deeply missed by her family, friends, and all who knew her. In lieu of flowers, the family requests that donations be made in Cheri’s honor to St. Jude’s Children’s Hospital. Due to current restrictions private services will be held at The Daleiden Mortuary at 220 N Lake St, Aurora, IL 60506 on Sunday, May 31st and Monday, June 1st. Please visit www.daleidenmortuary.com where you may leave condolences for Cheri’s family.

Cherilyn (Cheri) M. (Hames) Bohn, age 63, of Montgomery passed away on Tuesday, May 26th, 2020 with her family by her side. Cheri is survived by her husband, Terry Bohn; her oldest daughter, Tracey Bohn; her youngest daughter and son-in-law,... View Obituary & Service Information

The family of Cherilyn "Cheri" M. Bohn created this Life Tributes page to make it easy to share your memories.

Send flowers to the Bohn family.