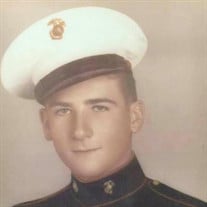 Charles William Bocan, 96, passed away January 5, 2022, at his home in Aurora, Illinois, after several months of declining health with his beloved Partner of 23 years, Betty Diaz by his side. Charles was born September 24, 1925, in Chicago, Illinois, the son of Charles J. Bocan and Mary Barry. Charles became known as “Bud” and later as “Chuck” to many. Bud started working at the age of 14 in Chicago after his father passed away suddenly to support his mother and Sister, Eileen. He loved Chicago as a city and knew it’s streets very well after working as a messenger. He later worked as a movie theater usher. At the age of 18, Bud enlisted in the Marine Corp and served in the 2nd Marine Airwing during WWII as a radio gunner from December of 1943 to July of 1946. Bud became an Expert Marksman with the M-1 rifle representing all Marine units in the 1946 All Pacific Rifle Matches held in Hawaii, something he was extremely proud of. Following his discharge, He met and married Alice Hart. Together they had 5 children. Bud spent most of his career in the beer business. He worked for Hamm’s Brewing Company and survived many company reorganizations ultimately ending his career with a company that distributed a selection of Mexican beers called Cibco Importing Company. After Bud retired, he decided to work part time for the Village of Glen Ellyn where he lived reading water meters. He worked that job until he was 80 years old! In 1995, Alice passed away and Bud found himself alone. He joined a catholic group called “Joyful Again” to get support from other widows and widowers going through the same thing. At “Joyful Again” he became known as “Chuck” and met Betty his partner of 23 years. Betty was extremely devoted and was his sole caregiver in his last few years of declining health. Charles was preceded in death by his parents, and his sister Eileen, and wife Alice Hart. He is survived by his partner Betty Diaz; children Chuck Bocan (Barbara), Leanne Sanzolone (Rick), Cyndy Bocan, Jill Szczepaniak (Tony), Kristen Gresk (Joe) and 9 grandchildren and 9 great grandchildren. Charles will always be known for his generous, kind, loyal spirit always willing to help someone out. A memorial date will be determined in the next couple of months. People wishing to honor Charles, may make donations to the American Heart Association (heart.org).

Charles William Bocan, 96, passed away January 5, 2022, at his home in Aurora, Illinois, after several months of declining health with his beloved Partner of 23 years, Betty Diaz by his side. Charles was born September 24, 1925, in Chicago,... View Obituary & Service Information

The family of Charles Bocan created this Life Tributes page to make it easy to share your memories.

Send flowers to the Bocan family.