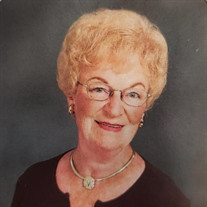 Carolyn M. Clemen, 99 of Aurora, IL passed away on Wednesday, April 15, 2020. She was born on February 23, 1921, in Aurora, Illinois, the daughter of Roy and Marie (nee Erath) Fiester. She graduated from East Aurora High School, class of 1939. Carolyn was united in marriage on February 14, 1942, to her roller skating sweetheart Herman (Hunce) Clemen and they celebrated 49 happy years together until his passing on November 4, 1991. After graduation, she was employed in the office of CB&Q BNRR Store Department in Aurora for five years. After taking time out to raise two dear daughters, she then went to work as secretary at Simmons Junior High School for 22 great years; 1961-1983. She had many cherished memories of her association with the faculty and students. Carolyn was a long-time active member of St. Joseph Catholic Church. She enjoyed volunteering for various functions and was a member of the Art and Environment Ministry. She was also a member of The Women of the Moose, the Phoenix Club, the Luxembourg Club, and the Tiger Club where she enjoyed good camaraderie with family, friends, and neighbors. She lived a full rounded life and, besides her love of family, she enjoyed cooking, gardening, sewing, cards, sports, traveling and walking. She was affectionately called the “Matriarch of Lehnertz Avenue” having the pleasure of not only being the longest resident on the street, but also the oldest in age. Carolyn leaves to cherish her memory, her daughters Kaye Lynn (Claude) Benson of Excelsior, MN and Susan (John) Sebeson of Naperville, IL; her grandchildren Amy (Josh) Stern of Chicago, IL and Lisa Sebeson of Naperville, IL; her sisters Mildred Hinds of Batavia, IL and Betty Campbell of Aurora, IL; as well as many loving nieces and nephews. She was preceded in death by her beloved husband Herman Clemen; her grandson Michael Horton; her parents Roy and Marie Fiester; her brother James Fiester; and her sister Shirley Krantz. Due to current restrictions, a private visitation will be held for Carolyn, along with a private funeral Mass at St. Joseph Church. Interment will be privately held at Mt. Olivet Cemetery. Arrangements are being handled by THE DALEIDEN MORTUARY, 220 N. Lake St., Aurora, 630-631-5500. Please visit our website at daleidenmortuary.com where you may leave condolences for Carolyn’s family. In lieu of flowers, memorial contributions may be made in Carolyn’s memory to St. Joseph Church. A celebration of life will be held later when conditions permit.

Carolyn M. Clemen, 99 of Aurora, IL passed away on Wednesday, April 15, 2020. She was born on February 23, 1921, in Aurora, Illinois, the daughter of Roy and Marie (nee Erath) Fiester. She graduated from East Aurora High School, class of 1939.... View Obituary & Service Information

The family of Carolyn M. Clemen created this Life Tributes page to make it easy to share your memories.

Carolyn M. Clemen, 99 of Aurora, IL passed away on Wednesday,...

Send flowers to the Clemen family.