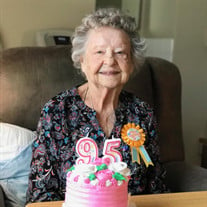 Bobbie Pride Duncan passed away on May 30, 2020. She was born April 18, 1925 in Georgiana, Alabama. She lived most of her adult life in Montgomery, AL. where she worked for the Alabama Department of Transportation and later an executive assistant in the governors office until her retirement. She was a lifelong seamstress as was her mother Ada Carpenter who both sewed for the public. Their front door was rarely locked and it was blessed with many members of Forest Park Baptist Church across the street. Most folks knew that after the breakfast dishes were put away the main meal of the day was prepared. Many a church goer dropped in and pulled up a chair to share a home cooked meal like chicken and dumplings or of course pound cake! In her later years Bobbie kept her hands busy by lovingly making and giving away quilts she pieced together with all the leftover scraps of fabric from her loyal customers. No one seemed to care that the hand quilting stitches had grown longer and less straight in her 90+ years. In Nov. 2017 her beloved grandson James Robert Duncan passed away. Robert lovingly cared for Bobbie after her only son (his father) James McAdoo Duncan Jr. died in April 2003. It was in 2017, at age 93, that Bobbie got on a plane with granddaughter Donna Gilmore and went to live in AZ. until April 2019 when she came to live in IL. with granddaughter Dayna Tarr finding a wonderful retirement home in Aurora, IL. at Sunnymere Senior Living Community. It was only fitting that Robert, Donna, and Dayna cared so deeply for her because Bobbie and her “Mamma” Ada Carpenter cared for and raised the three from a young age. Bobbie was preceded in death by her father Robert Lawrence Pride, her loving mother Ada Patrick Carpenter, her only child James McAdoo Duncan Jr., grandson James Robert Duncan, and sisters Desland Gipson Culpepper, and Edna Earle Pride Crumpton. Bobbie is survived by her nine grandchildren Donna (Paul) Gilmore, Dayna (Harlan) Tarr, Sean (Andria) Duncan, Shannon Duncan, and Shane Christopher (Christina) Duncan. Great-grandchildren (24), Ashlyn Salmon, Louis (Hannah) Salmon, Ariana Mariscal, Diego Mariscal, Sebastian Mariscal, Suzanne Tarr, Zachary (Emily) Tarr, Jeffrey Brandon (Kelsey) Tarr, Brittney Tarr, James E. Duncan, Kyle Duncan, Connor Duncan, Christopher Duncan, Devin Cawkwell, Madison Duncan, Shane Duncan, Sabrina Olivet, Kayla Olivet, Daniel Olivet, Alyssa Olivet, and Austin Olivet. Great-Great Grandchildren (6), Haley Buracker, Abigail Tarr, Olivia Tarr, Nora Tarr, Julia Tarr, Aiden Herzog and many loved nieces and nephews. The family would like to thank all those who have cared and loved Bobbie over her 95 years and for your kind words and prayers during these last several weeks. The family will hold a private memorial for Bobbie in Alabama when travel is more appropriate. Memorials for Bobbie can be made to: Sunnymere Senior Community Living online at https://sunnymere.com/donate/ or by mail: 925 6th Ave. Aurora, IL. 60505. Sunnymere is a non-profit 501c3 charitable organization.

Bobbie Pride Duncan passed away on May 30, 2020. She was born April 18, 1925 in Georgiana, Alabama. She lived most of her adult life in Montgomery, AL. where she worked for the Alabama Department of Transportation and later an executive assistant... View Obituary & Service Information

The family of Bobbie Pride Duncan created this Life Tributes page to make it easy to share your memories.

Send flowers to the Duncan family.