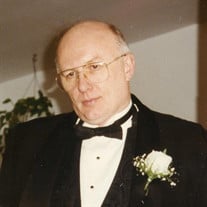 Arthur G. Misener, 75, of Aurora, IL, passed away Wednesday, July 3, 2019 at Presence Mercy Medical Center. He was born May 28, 1944 in Morris, IL. He married Mary Lou McGuan in October 1966. They have known each other since grade school. A true team, they were friends first and in time found love with each other. Arthur was a devoted fifty year member of Holy Angels Church. He was drafted into the U.S. Army but was given a medical discharge after three months due to having Polio as a child. As a young man Arthur worked on the farm. He graduated from Mazon Verona Kinsman High School and St. Ambrose University with a degree in Biology. Arthur was employed for thirty years in the food industry in Quality Control. He then was employed by Hollywood Casino in Soft Count for twelve years retiring in 2011. In his retirement he enjoyed tending his yard and garden, baking bread, country music, and spending time with his family. He loved attending his grandchildren’s school and sporting events. Arthur was a quiet man but someone you could always count on. He will be greatly missed by his family and friends. He is survived by his wife of fifty two years, Mary Lou (McGuan) Misener; five children, Ann (John Meenan) Misener, Thomas Misener, John (Christi) Misener, Jim (Chris Prescher) Misener, Brian Misener; seven grandchildren, Kathryn, David, and Christopher Meenan, Damir and Megan Misener, Ryan and Evan Misener; a sister, Dolores Johnson; two brothers, Joseph (Pat) Misener, Kevin (Cora) Misener; many nieces and nephews. He is preceded in death by his daughter, Carollyn Misener; his parents, Gerald and Evelyn (Maier) Misener; a sister, Mary Qually; a brother, Howard Misener; five brothers-in-law, Maurie Johnson, Kenneth Qually, Joe McGuan, Pat McGuan, and Mike McGuan; his mother and father-in-law, Bernard and Elzena (Fordyce) McGuan. Arthur’s family wishes to thank the doctors, nurses and staff of Presence Mercy Medical Center for the loving care he received. Visitation will be held Wednesday, July 10, 2019 from 10:00 AM until 11:30 AM at THE DALEIDEN MORTUARY, 220 North Lake Street, Aurora, Illinois 60506. (630) 631-5500 Funeral services will be held Wednesday, July 10, 2019 at 11:30 AM from THE DALEIDEN MORTUARY to Holy Angels Church at 12:00 PM; Fr. Michael G. Lavan will officiate with interment at Mt. Olivet Cemetery. Please visit our interactive website at www.daleidenmortuary.com where you may sign the guest book or leave condolences for Arthur’s family. In lieu of flowers memorial contributions may be made in Arthur’s name to St. Jude Children's Research Hospital.

Arthur G. Misener, 75, of Aurora, IL, passed away Wednesday, July 3, 2019 at Presence Mercy Medical Center. He was born May 28, 1944 in Morris, IL. He married Mary Lou McGuan in October 1966. They have known each other since grade school.... View Obituary & Service Information

The family of Arthur G. Misener created this Life Tributes page to make it easy to share your memories.

Send flowers to the Misener family.