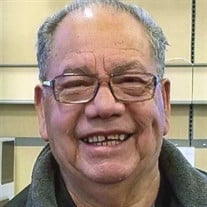 Antonio J. Acevedo, 79 of Aurora, Illinois passed away Wednesday, April 29, 2020. He was born on June 13, 1940 in Arroyo Seco, Tepetongo, Zacatecas, Mexico the son of Vicente and Maria de Jesus (nee Juarez) Acevedo. Antonio met his wife Paula in Cd. Juarez, Chihuahua Mexico in the early 1960’s they courted for some years before they got married on April 25, 1965 in Cd. Juarez, Chihuahua. After marrying they moved to New Mexico where they started their married life and met other families in the farming town, that to this day those families are considered family to him and the rest of the family, the Beckett’s, the Flores’, and the Rodriguez’. In 1969, Antonio decided to move to Aurora to continue to pursue the American dream, where he worked at 48 Insulation later known as Fibrex, Inc. there is where he worked his way up to management and took pride in his work there. Antonio loved baseball, of any kind. He cherished his championship trophies won during the years he was a manager for a local baseball league in Aurora, Go Broncos!!! His summers were spent at Phillips Park either practicing with the team or playing ball. Later in the 90’s he moved to Mundelein, Illinois where he worked at Stevenson High School for years. He loved working there until he moved back to Aurora, his home. Antonio was no stranger to anyone, if there was a way to help someone in need, he did not have to think twice about it. It was his nature and spirit. He was full of smiles, very generous hearted and had lots of love for his beautiful wife of 55 years treating her like a queen, giving his children unconditional love and support at all times and his grandchildren and great grandchildren that were his life. He is survived by his wife of 55 years Paula Acevedo. His children Elvia Acevedo (Jesus), Ruben Acevedo (Angela), Carlos Acevedo, and Rosie Quiroz (Jesus). His grandchildren Desiree Y. Bosso, Marco-Antonio J. Acevedo, Alexandria M. Acevedo, Cesar E. Acevedo, Julian D. Quiroz, Zeanna E. Acevedo, Cintia A. Zaldivar, Jaylin R. Acevedo, Leslie J. Acevedo, Nayeli C. Acevedo and Juventino J. Zaldivar. His great grandchildren Jada A. Bosso, Drea N. Bosso, Daniel J. Ramos, Mylah A. O’Donnell, Kehlani S. Clark and Zoraya R. Quiroz. His brothers Jose Manuel Acevedo and Juan Acevedo, his cousins, nephews and nieces and many cherished lifelong friends. He preceded in death by his parents Vicente and Maria de Jesus, his brothers Roberto y Aniceto and sisters Modesta, Blasa, Maria and Guadalupe. We will all dearly miss his heart of gold, his love for his family and friends. He was very proud of being an Acevedo and his Ranchito in Zacatecas where he planned to celebrate his birthday in December 2020. Due to current CDC restrictions, a funeral mass and celebration of his life will take place at a later date. Arrangements were handled by THE DALEIDEN MORTUARY, 220 North Lake Street, Aurora, Illinois 60506. (630) 631-5500. Please visit our interactive website at www.daleidenmortuary.com where you may sign the guest book or leave condolences for Antonio’s family.

The family of Antonio J. Acevedo created this Life Tributes page to make it easy to share your memories.

Send flowers to the Acevedo family.